You Are Here is the eighth episode aired of Season 1. For the original production order of the series, Blood Brothers should be viewed eighth. (see season 1 episode list)

A young man runs through the city in a desperate attempt to get away. He runs into the train station where, having run through the gate and missed the train, he is stopped by transit police. As he frantically shouts “they’re gonna kill me!,” a bullet shatters the skylight and kills him.

Having attended a thoroughly unproductive group therapy session, John Kennex is in no mood for a friendly ribbing from his partner, Dorian. His patience is further tested when, arriving at the crime scene, he is met by Detective Richard Paul and his MX-43 partner. Paul reports three apparent shots fired; one through the skylight, one through a bystander’s celo, and one through the victim, Anton Cross, into the wall. Since only one bullet was recovered, Paul’s MX suggests that the single bullet could have ricocheted around the station before hitting the victim. When Dorian points out that there is no residue from the floor on the bullet to support that theory, the MX starts to advise Kennex against listening to a DRN, a discontinued model. Kennex overrides the MX and Dorian offers a counter theory that the bullet was guided by an embedded circuitry. The MX continues to put down Dorian’s abilities and even offers to requisition an MX partner to replace him. Kennex, finally having had enough, pulls out his gun and shoots the head off the MX.

Back at the precinct, Captain Sandra Maldonado chews out Kennex. Paul, equally furious, threatens to shoot Dorian in retaliation, and he and Kennex scuffle. Kennex unapologetically argues that machines are not cops but “bullet catchers,” and he will dispose of faulty machines like he would a toaster that burns toast. After Paul leaves, Maldonado warns Kennex about his anger issues. Kennex assures her that therapy is working and this incident was just a minor slip.

Meanwhile, Dorian finds the victim’s girlfriend, Kira Larsen, who worked with Anton at Trope Software. As they drive out to see her, Kennex notices Dorian staring at him, grinning ear-to-ear. Dorian believes Kennex shot the MX because it insulted him, proving that Kennex actually likes him. Kennex insists he shot it because it wouldn’t shut up, but Dorian isn’t buying any of it. Kennex is relieved when they are interrupted by Rudy Lom calling to confirm Dorian’s initial analysis that the bullet was equipped with a guidance system.

At Trope Software, they deliver the bad news to Kira. She cannot think of anyone who would want to hurt Anton, and is unaware of any trouble he might have been in. The only thing new in his life was a headhunter from Kinsey named Natalie with whom he had been meeting.

While Kennex talks to Kira, Dorian goes off to examine Anton’s office files. As he waits for the files, Dorian is bombarded by computerized sales pitches tailored for him. He realizes Trope makes real-time tracking software for personalized advertising. Anton, a skilled programmer, had exploited a software bug to turn cameras, phones, and other devices around town into a precise tracking system – the guidance system for the bullet. Rudy calls to report that, according to Interpol, the circuit on the bullet was stolen from a Ukrainian armory. It appears Anton sold his software to gunrunners.

Back at the precinct, the team discusses the case. Since Anton was killed off, the arms dealers are apparently past the R&D phase and into production. Valerie Stahl volunteers to look into Anton’s financials to see if payments can be traced back to the dealers. Dorian is unable to locate Natalie, the headhunter Anton was seeing, so he and Kennex will check back with Kira to see if she got the name wrong or if she is lying.

Before they can leave, however, Kennex spots Maldonado questioning Reinhardt, the inSyndicate member who led the failed raid on the evidence locker (in the Pilot episode). Maldonado has been after Reinhardt ever since the raid, trying to find out what item in the locker inSyndicate wants. She is prepared to offer him a deal, but Reinhardt will not settle for anything less than a full walk. When Kennex joins them, Reinhardt offers to give him information on Anna, his ex-girlfriend who turned out to be an inSyndicate spy, including her whereabouts. He hints at another attempt by inSyndicate to recover the item from the locker in the near future, pressuring them to offer him the walk now. Maldonado, unwilling, orders him back to his cell. Kennex confronts Maldonado, incensed that she would even consider offering a deal to one who murdered so many under her command. Maldonado explains that she fears there is something even worse in the evidence locker.

Back on the case at hand, Kennex and Dorian find Kira at a park during her break. As Kennex questions her about Natalie, the arms dealers launch one of the self-guided bullets as a demonstration for a potential buyer. They have selected Kira as the target because she had seen Natalie with Anton and can identify her. As the bullet flies towards its target, Dorian senses activity in the computer network in the area and notices cameras starting to focus in. He pushes Kennex out of the way and shields Kira just in time to save her. The bullet catches Dorian in his abdomen and damages his linguistic circuitry. Kennex is now stuck with a Korean-speaking partner.

They transport Kira to an underground safe house where she is reunited with her young daughter, Aimee, and her best friend and baby sitter, Janet. Tracking signals cannot reach her there, and there are guards posted, but Kira is still afraid they will be found. She is beginning to doubt Anton, and now blames him for their predicament. She wants to get Anton’s memories erased by a scrubber so that she will no longer be a threat to whoever is trying to kill her. Kennex tries to persuade her that scrubbing will not solve her problems: what they need is to figure out what information she has that the killers are afraid of. They need her help in order to prevent this dangerous technology from getting out.

Captain Maldonado approves Kennex’s plan to use Kira as bait to draw out the arms dealers. Before they put the plan into action, they stop by Rudy’s lab to get Dorian repaired. While Rudy tends to Dorian, who is now stuck singing a Korean pop song, Stahl informs Kennex that she found Anton’s safety deposit box. Kennex and Dorian, now back to speaking English, head out to the bank to examine the contents of the box. There is no money, but they find bits of paper with numbers on them and a video chip. The video shows Kira and her daughter, and a voice threatens to harm them if Anton does not deliver the schematics. Anton was being extorted.

Meanwhile, Kira escapes from the safe house. Turning on her comm to allow tracking, she seeks out a scrubber whose shop is underground where the bullet cannot reach her. Once hooked up to the machine, she tells the scrubber to wait. She wants the arms dealers to watch her being scrubbed so they will leave her alone. Kennex and Dorian arrive at the scrubber’s ahead of the arms dealers. Before they can lead Kira out, Natalie and her partner arrive with guns blazing. With Dorian playing “bullet catcher,” Kennex is able to shoot down his target. Dorian also succeeds in disabling his opponent before backup finally arrives.

At the precinct, they show Kira the blackmail video Anton had kept. Kennex explains to her how Anton traded the software to save her and Aimee. He also shows her the pieces of paper they found. Kira tells him that the paper was a memento Anton had kept – his phone number written the old-fashioned way, with a pen on paper, that she had ripped up when they first met. Grateful that she still has memories of Anton, she gives the pen to Kennex as a token of thanks. After Kira departs, Kennex returns to his desk where, flirtingly, he uses the pen to write down something on a piece of paper for Valerie. She, unlike Kira, does not rip up the paper but keeps it with a smile.

At the end of the shift, Maldonado tells Kennex that a task force is working on plugging the location-tracking software bug. She then thanks him for not destroying any MXs today. Her comment is perhaps premature ... for Kennex retorts that “the night is young.”

Valerie: "Hey, stand up when you say that. Oh, wait, you already have." Richard: "My parents didn't have the money to make me tall. Or pretty." Valerie: "Even if you were genetically enhanced, Richard, you would only be a taller jerk." 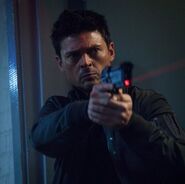 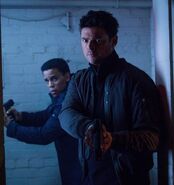 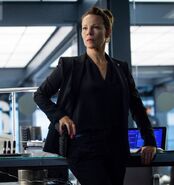