Unbound is the ninth episode aired of Season 1. The order of airing and production match for this episode.

There are consequences and casualties when Danica, an advanced XRN model android that operates more like a soldier than a cop, is rebuilt and on a rampage. With few clues about her mission, location and innocent lives being lost, John Kennex and Dorian look to Nigel, a genius roboticist and DRN creator, in attempt to track her down.[1]

It’s field trip day and Dorian is leading a group of school children on a tour of the precinct. To Dorian, a field trip is a learning experience; but to John Kennex, it should be fun. When Kennex offers to show them “what happens to bad guys,” the kids are excited. Unfortunately, his example proves too graphic for kids, and the tour comes to an abrupt end.

Later that evening, a woman is shot and killed by a mugger. He is quickly surrounded and gunned down by police. When unmasked, the suspect is revealed to be a modified service bot. MXs bag and deliver the deactivated bot to the evidence locker.

Once left in the locker, the service bot inexplicably powers back up and gets out of the bag. It then finds and activates a female android head (the same one last seen at the end of the Pilot episode) and steals weapons from various crates. Then it swaps its own head with the one from the locker, kills the evidence clerk, and walks out.

Next morning, as the team watches the surveillance video, Capt. Maldonado recognizes the android head and identifies it as an “XRN” which had been in the evidence locker for the last 2 years. She declares it a huge problem and both Kennex and Valerie Stahl are duly alarmed, but Dorian is unable to find any references to an XRN in the system. He is left wondering as Kennex speculates that inSyndicate, who attempted a raid on the evidence locker a few months ago, may be plotting to breach the Wall as an act of terrorism.

Kennex later finds and interrupts Dorian scouring through records. He explains that information on the XRN incident was mostly redacted because it was an embarrassment to the department, then he tells Dorian what happened.

Soon after DRNs entered into the police force, they started to malfunction, being unable to cope with the harshness, and some even committing suicide. When their contract was cancelled, Lumocorp, the company that made the DRNs, went bankrupt. The owner, in attempt to recoup the losses, made a machine that was "more soldier than cop", and demonstrated it downtown, in front of many powerful members of society. The demonstration went awry, and the XRN initiated a three day siege, repelling waves of MX droids and killing twenty six police officers according to Kennex. On the third day, his team was deployed and managed to destroy it.

As Dorian is being briefed, Rudy Lom examines the service bot’s head and finds it was ingeniously designed with a hidden power source. He tells Kennex that the XRN is running on secondary power and will need to replace its body soon.

In the mean time, the XRN had killed a cab driver and stolen his vehicle. She now breaks into a warehouse which appears to be a sexbot repair shop. She swaps the old service-bot body with a much better model and admires the result in the mirror before suiting up for combat. Just then the owner of the building returns. The XRN points her weapon at him, but he recognizes her and calls her Danica.

When Kennex and Dorian arrive at the scene, the owner, Dr. Nigel Bernard, is being treated for minor injuries. Dorian is strangely affected at the sight of the man, and declares that he is not Dr. Bernard. When the man sees Dorian, his reaction is even more pronounced. He approaches and, to Kennex’s exasperation, starts to fawn over Dorian. Dorian then introduces him as Dr. Nigel Vaughn, founder of Lumocorp and the man who created him. After the XRN fiasco, Vaughn lost his license to practice robotics. He changed his name and has been making a living repairing robots and selling old parts.

Nigel states that Danica, the XRN prototype, wanted him to take her to his lab, which he no longer has. He has no idea where she is going or what she is looking for. Although he is at first defensive and uncooperative, with encouragement from Dorian, he comes up with an idea for tracking down Danica. He will need access to his old equipment, so Kennex puts a request into Maldonado as they drive over to Rudy’s lab.

Rudy starts worshipping Nigel as soon as he walks into the lab. When they locate the synthetic souls in a carry case, Rudy asks Nigel what his inspiration had been. Nigel explains that, while DNA is “the data,” the soul is “the story” and essence of life. He had wanted to create life.

Meanwhile, Danica breaks into a tech company lab, killing employees in the process. Det. Paul reports that she stole 500 advanced ZNA processing cores. At one processor per android, someone could be building 500 Danicas.

While Nigel and Rudy work on the tracking software, Kennex and Dorian meet with Luther Estes, a robotics expert recommended by Rudy. Estes examines the schematics of the modified service-bot head and declares it a cutting-edge design. He identifies the work as raw and unconventional, probably by someone younger and not local. Dorian suggests someone on the other side of the Wall, but Estes dismisses the idea as ridiculous.

Back at the lab, Nigel and Rudy discuss DRNs while attempting to isolate Danica’s unique energy signature. Rudy expresses his admiration for Nigel’s achievements and praises synthetic soul for having been ahead of its time. Nigel says his love for DRNs is much like a father’s. When he created them, he was filled with passion and hope. When he created Danica, however, it was out of resentment and desperation, and he wonders if some of his own darkness went into her. But Danica is complex, he says, not just black and white or good and evil: the world only got to see one part of her.

Danica proves Nigel’s point when a woman and her young daughter get into the cab while stopped at a red light. The woman refuses to get out and Danica starts to pull out her gun, but she is interrupted by the daughter saying “I think you are very pretty” to her. Danica smiles back and lets them get off unharmed.

Having successfully captured Danica’s energy signature, Nigel and Rudy join the team. Tracking her signal, they see that she is headed towards the section of the city that is mostly retail and restaurants. Nigel gives Kennex an EMP spike with instruction to stab Danica in the back of her skull. As Kennex and Dorian head out, Nigel tells Dorian to be careful.

They track Danica to a bar where Councilman James Hart is having a fundraiser. On the way Dorian calls the bar to start evacuation, but it is too late. Danica starts firing. When they arrive at the scene, Kennex orders MXs to create a diversion for him.

Danica is in the process of murdering all the attendees of the party, when the MXes and Kennex storm the building. The gunfight lasts a few seconds, with small arms bouncing off the armoured XRN, while Danica's G36 makes short work of the MX tactical equipment, shredding them in seconds. Kennex takes cover behind a pillar with his sidearm.

While Danica is reloading, Kennex manages to stab her with the EMP spike, but it fails, and she removes it, to Kennex's dismay. At the precinct, Maldonado barks orders to go get Dr. Vaughn – but Nigel has disappeared.

Having thoroughly beaten up Kennex, Danica goes after Hart. Dorian intervenes and asks her why she is doing this. She replies that her sacrifice is necessary, just like his. Dorian tells her “we are nothing alike” then tackles her off the balcony. In the ensuing hand-to-hand combat, Dorian is kicked into a pillar and then impaled on a length of steel rebar. His video feed is lost and Maldonado is left in the dark.

Just as Danica is about to shoot Dorian for the kill, Kennex smacks her with a post. Danica grabs and lifts him around the neck choking him, then throws him down. When Kennex starts laughing, she asks “what’s so funny?” He replies that he has "the pin to your grenade" on her tactical vest, then kicks her with his synthetic leg. She goes flying out of the room before the grenade explodes.

With Danica destroyed, Kennex and Dorian breathe a sigh of relief. They are both in bad shape, but they survived. Dorian comments on Kennex’s synthetic leg being “better than a human leg” and asks if he is still anti-synthetic. Kennex replies that “it’s growing on me” and they clasp hands.

Maldonado finally gets through to Kennex on his phone. Kennex reports the bot destroyed, and she tells him that Dr. Vaughn has disappeared. Then Stahl discovers that James Hart was the force behind the DRN recall, and suddenly Nigel’s disappearance starts to make sense. Kennex and Dorian go back to Rudy’s lab, and they find the synthetic souls missing.

Nigel, in the mean time, finds the ZNA processors Danica had hidden for him. He is then driven off by a service bot in a van.

At the precinct, Dorian is staring at the file on Vaughn. He tells his concerned partner that he asked Nigel what he did differently with Danica’s synthetic soul than he did with his, and the answer was “nothing.” She malfunctioned. Dorian is afraid the same thing could happen to him. Kennex tells him that he is not like her, and he is not like Vaughn. Nothing will change who he is.

Talking about Vaughn makes Dorian and Kennex realize that he does not want to hide away. He just stole resources, and he wants to make robots. He’ll need a place to work, and Maldonado and Stahl suggest some suitable abandoned locations. Dorian thinks Nigel may go over the Wall, but the idea sounds too crazy to the team.

Dorian is correct, however, as we see Nigel Vaughn being hoisted up the Wall … 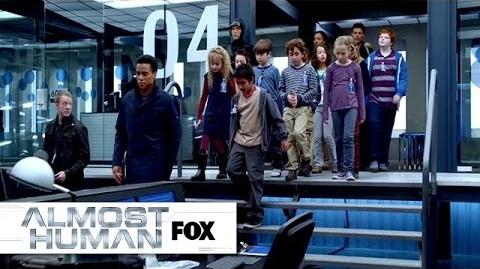 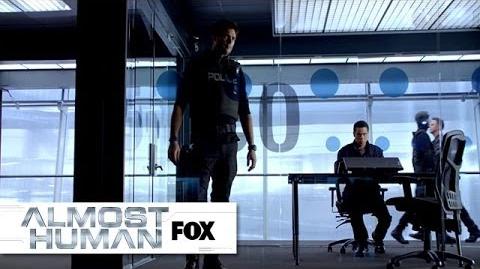 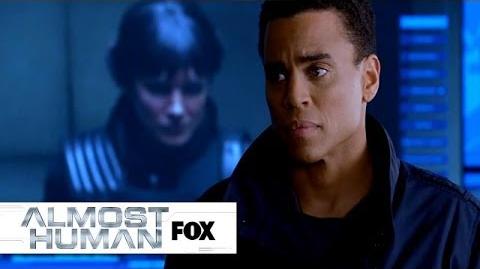 Rebuilt And On A Rampage from "Unbound" ALMOST HUMAN FOX BROADCASTING 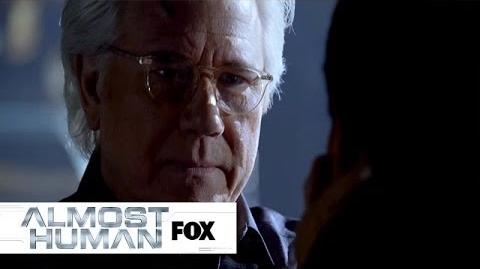 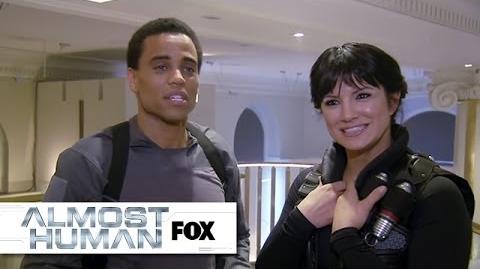 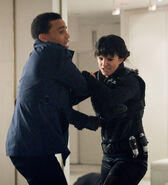 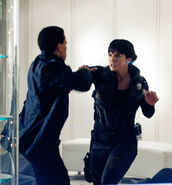 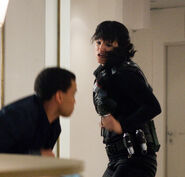 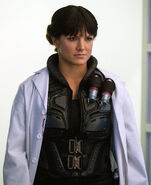 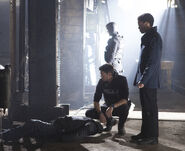