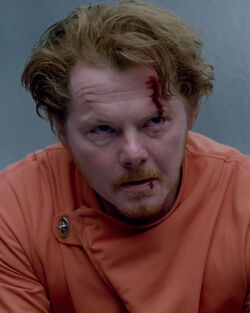 Trevor is a member of inSyndicate who was used as a decoy to infiltrate the Police Precinct during case #00C-Q74100. The Police were aware of his previous affiliation with the Vangoons. He is married to Celine and is 5'10".

During the attack on the Omni truck, he shot himself in order to be captured by Police. He was treated at County Hospital before being transferred to the Police Precinct. He was interrogated by Detective John Kennex, who inflicted further injuries on him to obtain information on the whereabouts of Detective Pete Vogel. Dorian was able to ascertain that Trevor shot himself. Trevor provided information to Detective Kennex on Vogel's whereabouts, but the police were unaware it was a trap being set by inSyndicate. Trevor was promised security in a safe house, but prior to leaving the station, escorted by Officer Patel, he faked the need to go to the bathroom. Once in there he regurgitated up a small device, which had been attached to a string, and placed it in the bathroom where it was unlikely to be detected. This device was used by inSyndicate during the incursion to cause the MX-43s to go offline by jamming their frequency. Trevor was a part of the operation to attempt to access the Evidence Room.[1]