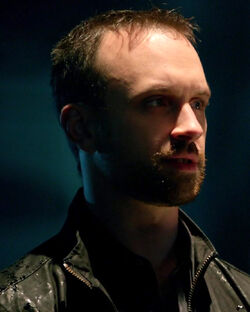 Trevor Cooper  was a Detective in the Narcotics division of the 11th Precinct of the City.

Trevor Cooper attended the Police Academy with John Kennex. He was the only member at the Academy who could out run and out shoot Kennex.

Trevor was killed by Gavin Maxwell who he had assumed was The Bishop, a dealer in Benzupropene aka 'The Bends'. Trevor was pursuing an unauthorized undercover operation in order to ascertain the identity of The Bishop. He had hidden the receiver of the Subcutaneous Wire he had inserted in his stomach area in the chimney of the cabin on Lake Casalino he and his wife had inherited from his father.

Trevor was married to Kelly Cooper. His last communication with her was via his palm phone.

Kennex and Trevor had been friends since their Police Academy days. Kennex had not seen Trevor for a number of years.