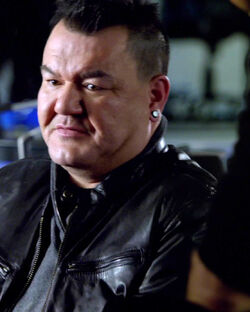 Tony Han is a low level dealer for The Bishop.

Detective John Kennex has used Tony Han as an informant in the past as Han hates jail. The last favor that Han did for Detective Kennex had Iggy trying to cut Han's throat.

His local haunt is the Koln Ciderhouse in the Koln Avenue District. With Dorian's assistance, Detective Kennex encouraged Han to join them outside, (by throwing him through the front window).

The meeting was arranged for Pier Four in the Defense District, in an old abandoned building.

Tony Han's girlfriend is Mona Davis and they have a child together.