The Bends is the fourth episode aired of Season 1. For the original production order of the series, Perception should be viewed fourth. (see season 1 episode list)

An old cop friend of Detective John Kennex's goes undercover, posing as a "cook" of a highly addictive street drug called "The Bends." But his cover is blown. As the scope of the intense drug investigation unfolds, a determined Kennex and Dorian call on Rudy Lom for assistance.[1]

The episode opens in media res of Rudy Lom running out of an underground lab and getting winged by a bullet. John Kennex and Dorian, on a break on theid shift, are at a Japanese sushi restaurant that John appears to be regular at. Dorian wants to go back to work, but Kennex insists on staying until he finishes (as it is a custom in Japan), so Dorian talks with Nuri, the chef, and has him serve up a piece of sashimi for Kennex: a live slug.

Later that night in an abandoned warehouse, Trevor Cooper, an undercover cop, and his cook are aiming to meet up with The Bishop, a big-time peddler of Benzupropene, an addictive narcotic made from algae that is known as the Bends. The cook produces a sample and tosses it to the VX bot in league with the dealers, and the VX tests the sample by swallowing it. He declares it to be 84% pure. A man appears, who Cooper assumes is the Bishop. 'The Bishop' says he does require a cook, but he receives a call, shoots the cook, and extracts a subcutaneous wire from Cooper before killing him too, despite his protestations. The next morning, Kennex and Dorian arrive on the scene and meet up with Detective Richard Paul, who shows them to the vials of The Bends in Trevor’s trunk and the bodies in the warehouse. John recognizes Trevor and is convinced that he didn’t become a dirty cop (which Paul is set on), as he knew him from their days at the Academy.

Back at the precinct, Alexio Barros, the captain of Cooper’s precinct and the head of the Narcotics Division, shows up to fill Maldonado in on the case. Cooper had previously been an undercover cop, but was on no current assignment. It is suspected that he was undercover 'off the books' to either hopefully net The Bishop, being a narc distributor and all, but it is more likely suspected that Cooper was breaking bad, as there were recent large deposits and withdrawals into an active bank account under his dead father’s name. After Kennex questions Kelly, Cooper's wife, he and Dorian head up to a lake-side cabin that the Coopers have been restoring to find evidence to prove Cooper’s innocence, as Cooper was doing some work on the cabin in the days leading up to his death. There, they find the cabin ransacked, but within the fireplace, which Kelly said Cooper had been fixing up, Kennex locates the receiver which the subcutaneous wire pulled from Cooper's abdomen was still recording to. They return to the precinct and play the recording for the team to try and piece the case together.

Meanwhile, sales of the Bends continue to rise, as do overdoses. As a last-ditch effort to draw The Bishop out, Kennex offers to pose as a Bends cook, which Maldonado points out the man can not even cook Ramen, so instead he has the bright idea to put Rudy Lom undercover instead, thanks to the reasoning that he knows the chemistry and can be convincing as a Bends cook.

Rudy takes a little buttering-up, but he agrees and starts working on his disguise/wardrobe while Valerie Stahl and Paul prep his criminal background and CI contact. He’s set up as Callum Waits, a recent parolee who was in the Barge prison for six years (a shortened sentence for good behavior) with two counts of possession and intent to distribute. His disguise (nice suit, a fedora, and round glasses), however, doesn’t fly with Paul or later with Kennex.

Meanwhile, Kennex and Dorian head to a downtown bar, the Koln Ciderhouse in the Koln Avenue District to meet up with Tony Han, a low-level dealer under The Bishop to use him as a middle-man to arrange a meeting. Kennex’s first attempt to get into the bar alone (as the owner/barkeep/patrons don’t take kindly to androids) doesn’t work, so he brings Dorian in and they toss Tony out the already broken window. A little rough questioning, 3.6 milliliters of The Bends in Tony’s pocket and the agreement to write off his girlfriend's recent gun charges, gets them in with Tony, who agrees to assist in brokering a meeting between The Bishop and the new cook.

Back in the lab, Paul and Stahl quiz Rudy on his cover ID, but he falters/hesitates and Paul harshly instructs him to keep his lies as close to the truth as possible without actually giving the truth away. After a little mishap during a test cook (forgot to add iodine, the pressure cooker blew a gasket and took out an MX’s eye, etc.), its go time down at an isolated pier!

Before he goes in to “get the Bishop to say he distributes narcotics,” Rudy downs a vial of some liquid (still in beta testing, mind you) that turns him into an undetectable GPS locator. Kennex and the team wish him well, despite feeling that he’s going to die. Paul is hiding outside and as Rudy walks past, Paul releases some cockroaches which are revealed to be robotic bug. Inside the warehouse, Rudy’s fumbling all over the place, so Dorian shuts down his outgoing comms and goes in as a decommissioned police issue DRN that works for “Callum Randolph Waits”. Rudy manages to cook up a 95% pure batch, after which The Bishop appears out of nowhere, leads Rudy out of the small dirty lab, and has him drink a counteragent that nullifies the GPS locator before taking him to the real lab. And that’s when the back-up team bursts in and captures one of the goons, IDed as Effren Cruz, but it’s too late to recover Rudy.

A little questioning gets Effren to reveal that Gavin Maxwell (the baldie thought to be The Bishop) isn’t really The Bishop, and the team realizes that they must have a mole, since the GPS tech was developed mere weeks ago. What’s more is that Maldonado pulls up Maxwell’s release papers in her office to find that Barros signed for his release. To confirm her suspicions, she calls Barros (interrupting his little chat with Rudy) to update him on the Cooper case, and his phone’s signal is tracked to the Ironworks District, near where Rudy was abducted from. Rudy continues stalling for Kennex and his team, which Barros finds amusing. And then the VX tries to reach the stooges in the warehouse and Rudy bails, which catches the episode up to the cold open. In the course of his escape, Rudy is shot in the upper arm.

As Maxwell and another gun-toting henchman follow the bloody trail left by Rudy, Kennex and Dorian show up, and Kennex exchanges fire with Barros, who uses the VX as a shield to get into a sewer grate. Dorian spots Rudy hiding up on what appear to be support beams and goes to get him down, but the VX attacks him and an android fight ensues. Dorian takes a good few hits, but comes out on top, decapitating the VX with a handy hook. Kennex, meanwhile, follows Barros into the sewer and wails on him with a pipe (as he’s out of ammo), but he recovers Barros’s gun and kills him after Barros says he’ll bury Kennex like his “loser friend Cooper” and declaring that he is a Police Captain and it will most certainly be a mistrial.

Back at the precinct, it’s smiles and applause all around for the recovering Rudy, who at least wants a break (and maybe a little time to bulk up) before his next case. Kelly arrives to thank John for not giving up before they head off in their respective directions. John and Dorian head to John’s car. Dorian informs Kennex that he had invited Rudy to join them so they could go to McQuaid’s, John's cop bar of choice, to celebrate. Dorian has also invited himself along on this social outing. Kennex has been outwitted, so he explains the ground rules of behavior as they roll out.[2]

"Cooper was my friend. And until someone can prove any different he deserves my allegiance."

- John Kennex to Dorian about his friendship with Trevor Cooper

"The truth is your friend, especially when you are telling a lie."

"It’s about Passion, Passion in your work. It’s science, yes, but it’s also an art. Ingredients are ingredients but, if you go quiet and you just listen… they start to talk back to you. And they tell you what they need. The whole becomes greater than the sum of the parts. Take your robot for instance. So many disparate ideas and concepts that all need to come together. But if you’ll approach your work with reverence, and put your very soul into it, it starts to get a life of its own. And dare I say… you can grow very fond of that creation…" 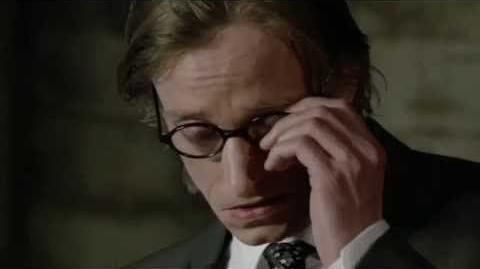 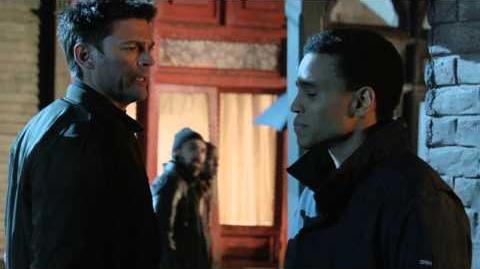 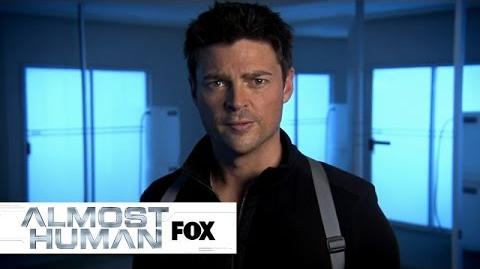 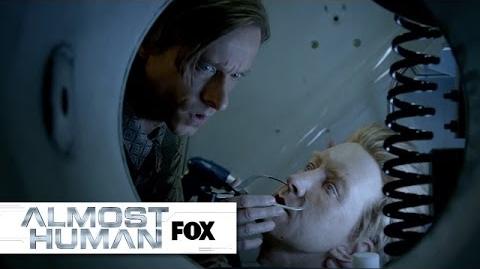 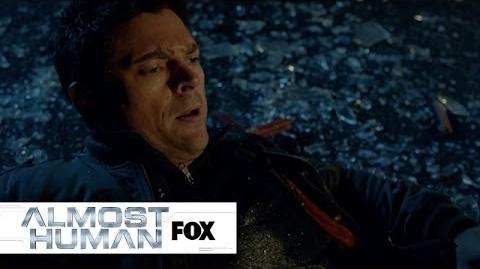 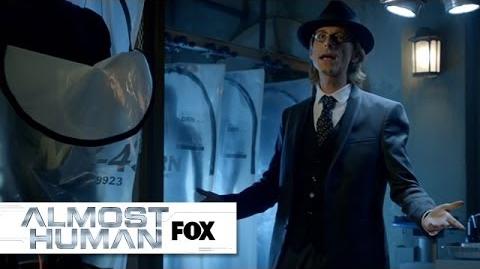 Pomp and Circumstance from "The Bends" ALMOST HUMAN FOX BROADCASTING 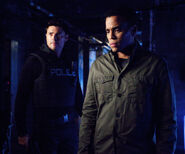 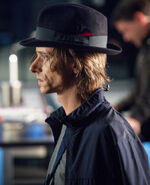