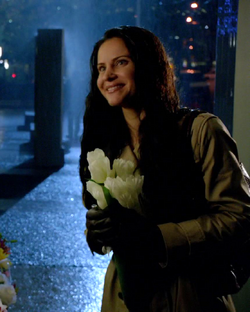 Tanya King was murdered by a humanoid Servicebot.

Tanya would purchase flowers each week from Floradrop, she was well known to the vendor. The day of her murder she picked up some white tulips. Initially the servicebot attempted to take her purse, which she gave up, but she was still shot and killed. The motive for the killing was that the servicebot wanted to be 'apparently' destroyed and stored in the Evidence Locker room.[1]