Straw Man is the thirteenth and final episode of Season 1. The order of airing and production match for this episode.

Detective John Kennex and Dorian investigate a string of murders by a copycat of a serial killer that Kennex's father put in jail.

At a crowded shelter, a teenage runaway is harassed by a persistent young man. A man in a wheelchair comes to her rescue and, as the shelter has run out of pods, offers to take her to another shelter. She accepts his offer and they leave together after getting meal-supplement pills from the dispenser. As they go down the street, the man grabs her hand, scratching her in the process. She becomes dizzy and starts to faint. The man stands up and loads her into the back of the van that was parked in the alleyway.

Meanwhile at the precinct, the annual android officers’ review is in progress. Having already spoken to detectives about their MXs, the review board is now interviewing Captain Maldonado and others about Dorian, the only DRN in service. Maldonado praises Dorian, but she is evasive when asked why she chose him, DRN-0167, specifically for the assignment. Rudy Lom is clearly nervous while assuring the interviewers that Dorian does not require another Luger Test. John Kennex appears unexcited as he dryly itemizes Dorian’s skills. Dorian himself is eloquent in expressing his gratefulness for being back on the force. He is innocently happy until, after the interview, Kennex tells him that it took “way longer” than usual. As they drive to the crime scene for a new case, Kennex continues to worry Dorian, making him believe that he told the board about some of the more questionable incidents from the past, before finally admitting to messing with him.

They arrive at the scene where the body of the runaway was found. Kennex sees a piece of straw and knows immediately that it is a copycat crime. The body is stuffed with straw and sewn up, just like the “Straw Man” murders 10 years ago. John’s father, Edward Kennex, caught the killer, Michael Costa, and put him in the Cubes for life. It was the collar of Edward’s career, shortly before he was killed.

Back at the precinct, Kennex finds his father’s original case notes sealed. Dorain suspects it is because Edward was under investigation for stealing tech from the evidence locker. In the mean time, the victim has been identified as Abigail McKenzie. Maldonado briefs the team on the copycat nature of the crime. Since Costa was a schizophrenic, Valerie Stahl plans to look for psychiatric patients that fit the profile. Dorian suggests they visit Costa to see if he’s been contacted by the copycat. Richard Paul will try to locate the source of the straw. Before leaving for the Cubes, Kennex asks Maldonado for access to his father’s files.

At the Cubes, Kennex and Dorian interview Costa who is described by the warden as a model inmate. With his paranoid schizophrenia under control, Costa calmly protests his innocence. Then he states that Det. Kennex, the arresting officer, had also believed him innocent. Although Dorian does not find Edward’s name in the visitor log, Costa is adamant that he came to see him. He says Edward was working on a proof, an angle involving robotics and crooked cops, when he was killed in the line of duty. On their way out, Kennex reveals to Dorian that one of the names in the visitor log is an alias his father used. It appears Costa is telling the truth, which means perhaps the original killer is back.

Upon returning to the precinct, they are told by Stahl that the stitching on the new victim is identical to the stitching from the original crimes. Either the copycat has had extensive contact with Costa, or it is the same killer. Kennex deliberately withholds information learned from Costa. He shoots warning glances at Dorian as he is called into Maldonado’s office.

After receiving the original case files from Maldonado, Kennex explains to Dorian his reluctance to share information – his father used an alias because he trusted no one, and some of those people are still around. He refuses Dorian’s help with the case files and sends him instead to Rudy’s lab to assist in the analysis of the victim’s body.

Reviewing his father’s notes at his apartment, Kennex learns Edward did indeed suspect that Costa had been framed. He also finds photos of the victims’ feet, all circled. He is then called to the lab where Rudy & Dorian have discovered a clue.

Dorian had noticed a small puncture wound on the victim’s fingertip. Examining the fingers, Rudy found absolutely nothing under her nails, not even atomic traces of dirt. He believes the body is a replica and not the real victim. But Abby had not been missing long enough to be cloned. They are at a loss until they look at the feet and find she is flatfooted. Suddenly Rudy springs into action. Using an old organic printer and a cupcake, he demonstrates how the material settles to create a flat bottom. Newer bio-printers have corrected the flaw, but old models would not be able to maintain the arches in the feet. Moreover, the old printers could not print the organs to scale – which explains the straw stuffing. The kidnapper must want to keep his victims alive while ensuring that nobody is searching for them.

While Dorian briefs Stahl and Paul, Kennex updates Maldonado. He tells her about his father’s suspicions, what Costa told him, and his own belief that Edward’s untimely death was no coincidence. They are interrupted by the news of another body being found.

The latest victim is another runaway named Vaishali Jain. Dorian notices the same pin prick on her finger, and Kennex makes the connection: both victims were at major shelters with meal-supplement dispensers that prick fingers in order to determine your nutritional needs. Maldonado’s plan to flush out the Straw Man calls for uniformed officers and MXs to openly patrol all but 2 of the city shelters. Plainclothes will stake out the remaining locations.

That evening, Paul is under cover outside one of the shelters. He bumps into a young man wearing night-vision sunglasses. After some good-natured ribbing, Paul shows his softer side by giving the teenager bitcoins to help him get a bed for the night.

While on their own stakeout, Dorian asks Kennex if accusations against his father could possibly have been true. Kennex tells him a story about how his father almost got himself killed by a corrupt cop for refusing to take a cut. Edward was the reason why John became a cop – he was not dirty.

In the mean time, the Straw Man spots an MX while making another attempt at kidnapping. He is forced to move on. A short time later, Paul finds the familiar night-vision glasses dropped on the side of the road. He sees a van pulling away and calls it in. A drone pursues and, as the van pulls up and the driver gets out, transmits the image to headquarters. The suspect is ID’d as Glen Dunbar, with a record for black-market tech trade.

Kennex and Dorian arrive at the scene with MXs and find the teenager still alive in the back of the van. Entering the building, they find coffin-like capsules containing bodies with unknown tech on them. They also find Abby and Vaishali, both still alive. As the MXs carry out the women, they hear a gunshot. Kennex sends Dorian over to investigate. The suspect is down, but Dorian sees that it is a duplicate rigged with an explosive. In the mean time, Kennex, who was exploring on his own, is attacked by Glen. Although badly beaten, Kennex eventually manages to shoot Glen. Examining Glen’s body, they discover that he is a cyborg, his body fused with biotech. They also discover that the bio-printer and robotic parts found at the scene all came from the evidence locker. Kennex’s father, who had been accused of stealing the tech, must have connected the flat feet to the stolen printer. Looking up records, Dorian finds that the officer in charge of the evidence locker at the time, Silas Grant, was killed just 3 weeks after Edward’s death.

The Straw Man case is now solved. Glen had a degenerative disease which he tried to combat with cybernetics. His victims were used as his test subjects. His experiments worked, but the tech started to fail after 10 years, so he started kidnapping again. Grant was selling the missing tech, and he tried to pin the theft on Edward to cast doubt on his investigation. Both Edward and Grant were presumably killed by Glen. Costa is cleared of all charges and is being released. Maldonado congratulates John on finishing his father’s work and clearing his name.

Dorian reports to the interview room for a callback on his review. He speaks and acts like an MX, as advised by Rudy, but the interviewer is there simply to inform him that his term has been renewed. He tells Dorian that he received glowing reviews, especially from his partner who gave him credit for still wanting to be on the force. Dorian will continue his assignment with Kennex.

That night, Kennex is at a noodle stand waiting for his supper when Dorian finds him and presents him with a gift-wrapped leg. He thanks Kennex for his “glowing review” upon which the board based their decision to renew his term. He had Rudy pull some strings for the gift, the best and the newest synthetic leg not yet available on the market. Kennex is touched by the gesture, and his gruffness almost dissolves when Dorian tells him he is glad to be partnered with him. But he will not admit to Dorian being the reason for wanting to stay on the force, and he is exasperated when Dorian starts to choke up. Fortunately for him, dispatch calls just at that moment, and Kennex and Dorian take off for their new case.

" Listen … I know I’m not human, and I can never be what Pelham was to you. I get it. I really do. But I’m glad Maldonado put us together." 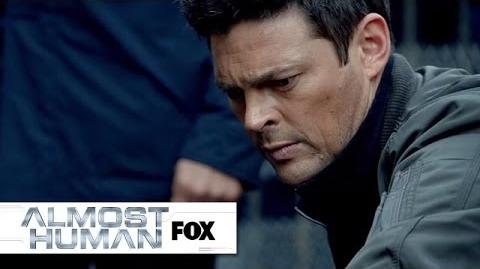 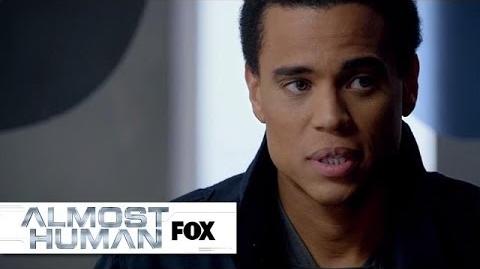 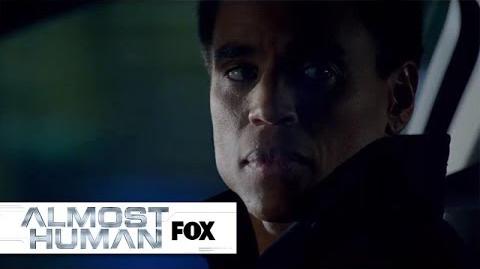 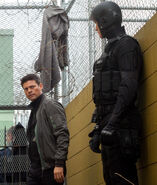