Skin is the second aired episode of season 1, and the fifth episode produced overall. For the original production order of the series, You Are Here should be viewed second. (see season 1 episode list)

Detective John Kennex and Dorian are dispatched to investigate a murder and high-profile missing persons case that lead them into the highly profitable world of IRCs - Intimate Robot Companions - also known as sexbots. Meanwhile, Kennex looks to reconcile a part of his troubled past.

A man (Sebastian Jones) is killed by two members of the Albanian Consortium in a hotel room after running a series of tests on a red-headed prostitute, Charlene. The two men foil the hotel security cameras with Flash Masks, enter the room using an electronic lock breaker and drop a DNA Bomb, which contaminates the whole crime scene, as they leave with Charlene. The next morning, Dorian and John Kennex arrive at the crime scene, pausing to entertain on-looker kids outside the hotel entrance. Dorian’s showing-off is cool and all, but Kennex misses the mark with his knife trick into his synthetic leg.

Dorian chides Kennex for the poorly thought-out stunt and mentions that kids and cats can sense things that adults can’t, and this may be why Kennex doesn't seem to be able to relate to kids well. Kennex claims he has a cat allergy; Dorian wonders if it's actually the other way around.

Up at the hotel room in the Deckard Gardens Hotel, they learn about Jones, the DNA Bomb, and view the security feed. A little research leads Kennex and Dorian to a repo storage facility (as Jones’s property was repoed because he declared bankrupt 3 months prior) and they find that Jones had a court summons. Meanwhile, the DNA that Charlene surprisingly left behind turns out to belong to a woman who has been missing for three weeks, Nicole Bloomquist. A mother, Kristen Haseman, is abducted in a parking structure as she’s throwing out her son’s drink.

Stahl links three other Missing Persons cases with the same MO as Kennex focuses on questioning Victor, a very young boy. The questioning doesn’t seem to be leading anywhere until Kennex notices that Victor is looking at the little giraffe tchotchke on his desk, which animates when touched on the head, so he entrusts the animatronic toy to Victor for safekeeping (and comfort), learning in the exchange that the kidnappers drove a silver car.

A security camera finds the car, but it has stolen plates, so the best bet is to find Intimate Robot Companions, or IRCs. On the ride over to pay a visit to Lorenzo Shaw, Jones’s former partner, Kennex and Dorian talk about mortality and dealing with death when it comes to the relatives of victims.

The visit to Shaw, who was on the outs with Jones and suing him for intellectual property rights, doesn’t reveal much, except that their biggest client, an Albanian Consortium, pulled out of their contract to cut out the middleman. John, however, has Dorian grab the Albanian Consortium customer files from Shaw’s business network to stir the pot a little … by taking a bunch of cops to one of the clubs, Are Friends Electric, owned by the Albanian Consortium to test the IRCs for human DNA and ask around about the red-head, which gets the attention of Yuri Idrizzi, the head of the Albanian Consortium. Their informal questioning leads nowhere, even though Kennex and Dorian were aware Yuri was totally lying, but Valerie Stahl calls them with an update on the Kristen Haseman case. The license plate on the car had a tag scrambler, and the car was tracked to an industrial facility where it stopped for twenty minutes. Luckily, Kennex and Dorian are close by and arrive to find a skinned and discarded Synthetic – Charlene – at the bottom of a stairwell, so they bring it to Rudy Lom.

Unfortunately, the memory’s been destroyed and Rudy needs a live one – for investigating, not for companionship, as Rudy awkwardly steps around the other uses of sex-bots besides the old in-and-out.

They realize that because Charlene was skinned, whoever was making the bots must have been growing the skin from harvesting human DNA, which is what got Jones killed. Leaving Rudy's Lab, Dorian and Kennex talk about remembering people after death before Dorian segues into the dating profile he set up for Kennex earlier (which Kennex took as a joke). It’s gotten a few hits and Dorian wants to update it with his personal preferences, and Kennex describes Detective Stahl to a T as Dorian points out. Kennex was also describing Anna Moore.

Coincidentally, Stahl calls them from the precinct to let them know that there’s a hit on the silver sedan. A short chase ensues, and a small squad surrounds the sedan with two members of the Albanian Consortium… and Vanessa, one of their bots. After testing from Dorian on the skin, it is discovered that it belongs to a woman who was abducted two months prior, Lorraine White, so they bring Vanessa in for questioning, too.

Vanessa isn’t too much help when Kennex is questioning her, but she IDs the discarded bot as Charlene and wants to see her. Dorian takes over when Kennex’s questioning gets too insensitive and learns that Yuri Idrizzi told her to go with the two she was with, so that means its back to the club!

The raid is a bust, as the Skin Lab is in a different building, but Dorian finds a discarded module near a computer in the club basement. He recognizes it as a learning module that’s built into DRNs, and one flaw of said module is that it gives off an unwanted GPS signal when it’s activated or updated, which means that they can backtrack Vanessa’s signal to find where she was 'born'.

The team learns that Vanessa was activated in Kingston Heights, so a raid team heads to the Skin Lab taking down facility room by room and rescuing Kristen, who was attached to the harvester, along with five other women in varying states of harvesting. Kennex reassures her that “Victor’s going to be very happy to see you.”

Back at the precinct, the team wraps the case up and decides to celebrate, but Dorian informs Kennex he has a date that night, thanks to the dating profile. Vanessa need to be deactivated, as human skin synthetics are illegal, and Dorian stays with Vanessa for support, even though he isn’t too pleased with the idea of deactivation. And to bring things full circle for Kennex, he waves goodbye to the departing Victor and Kristen and pays a visit to his former partner’s wife, Maria Pelham, and son, Marty Jnr, (at Dorian’s earlier suggestion).[1]

"Don't scan my testicles. Ever again!"

"The best proof that one has existed is in what’s remembered after they’re gone."

"I will remember you." 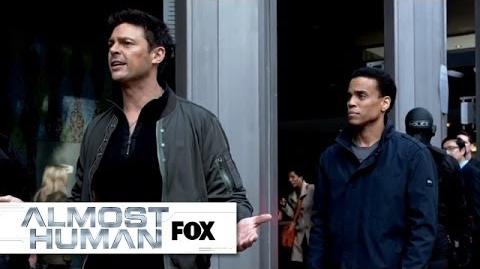 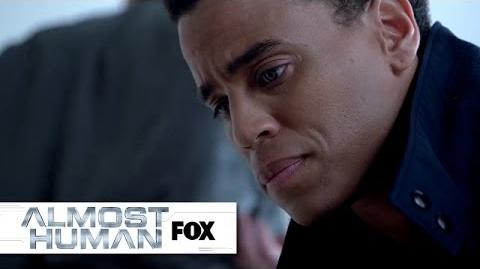 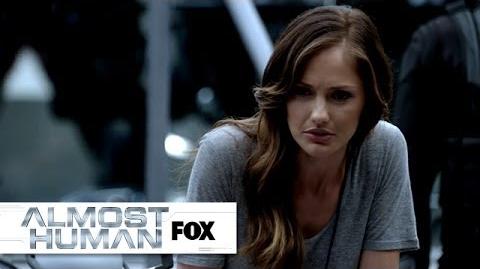 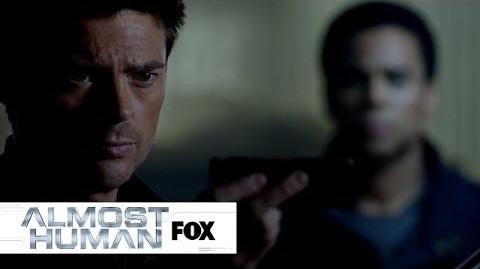 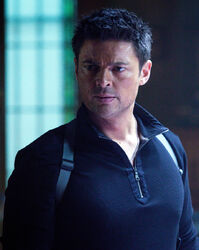 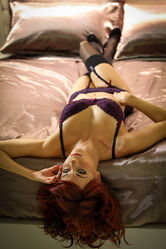 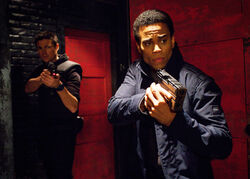 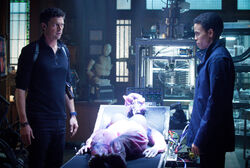 John Kennex and Dorian over the body of a Shaw I.R.C. (sexbot) 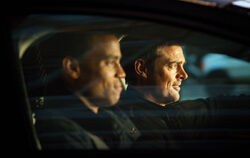 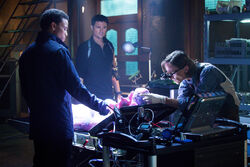