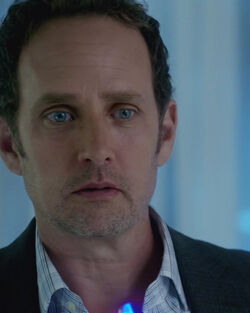 Sebastian Jones was an award winning cybernetics designer and founder of Orillian Sapients, a robotics company specializing in sex trade robots as well as the owner of 23 patents. Jones won recognition for his development of the blush response.[1]

Sebastian Jones grew up in the City and he attended the City University where he studied robotics and cybernetic design. After graduating he worked for a number of recognized brand name robotic companies before starting his own business “Orillian Sapients” which specialized in creating sex bots, or sex-trade robots. The business became very successful in part due to Jones’ creation of the blush response and Jones became very wealthy. His company was recently placed in the top three net grossing robotics companies in the country.[2]

The Blush Response - Winner of the Innovation of the year award.[4]

Sebastian had hired the services of Charlene, an IRC in order to test her for Human DNA. He met her at the Deckard Gardens Hotel. He was observed doing so via phone surveillance and two thugs were dispatched to kill him. They shot him and tainted the crime scene with a DNA bomb.[5]

Lorenzo Shaw was Sebastian's former business partner in Orillian Sapients. They were currently on the outs as Lorenzo was suing Sebastian in the Middle Ward Corporate Court for the 3rd Judicial District.[7]

The Albanian Consortium were former clients of Orillian Sapients, and were the largest purchasers of IRCs. They withdrew their support of the company and Sebastian's gamble to invest heavily in new technology sent the company bankrupt. Creditors forced bankruptcy onto the company 3 months prior to Sebastian's death.[8]