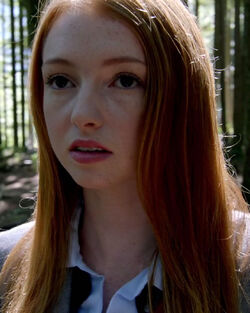 Scarlett Davis was a Chrome. She attended Mendel Academy.

While under the thrall of the drug Vero, she appeared to die of a heart attack. Further analysis revealed that she was killed by the drug in a deliberate overdose. The motive for her and Elinor Church's simultaneous murder was that the mother of Lila Hoving, Mrs. Hoving, believed that the girls were responsible for Lila's drowning as they had lied about being with Lila the night of her death.

Scarlett was not talking to her father at the time of her death as he had paid off Mrs. Hoving's private investigator and had destroyed recordings that proved that the girls had all been together. Scarlett did not approve of her fathers actions and had wanted to tell the truth about them being together.

It was eventually revealed that Lila had committed suicide after taking Vero. Lila was a 'natural' and the drug was specifically designed for Chromes and Lila was shown how limited she was by taking it.