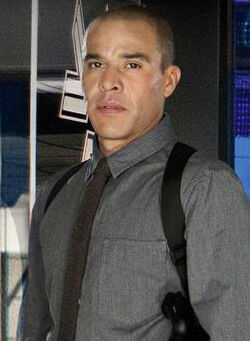 Detective Richard Paul is assigned to the Detective and Investigations Division, Delta Section, the same division as John Kennex and Valerie Stahl, under the command of Captain Sandra Maldonado.

Paul is distrustful of Kennex's return to duty, and is among those who do not welcome him back with open arms.

Superiors have noted that Paul’s uncompromising perspectives on police work and procedure have lead to “low-level” personality conflicts within the department.[2]

Paul was married but is now divorced.

He took his mother to Mexico to celebrate her birthday.

"When you're undercover, nothing's perfect. Not your cover story, not the product. The only thing that has to remain steady is you. If everything falls apart, you fall back on the truth. Keep your lies as close to the truth as possible. The truth is your friend. Especially when you're telling a lie."

- Richard Paul to John Kennex (You Are Here)

Retrieved from "https://almost-human.fandom.com/wiki/Richard_Paul?oldid=9405"
Community content is available under CC-BY-SA unless otherwise noted.