The year is 2048. Meet John Kennex, a cop who survived one of the most catastrophic attacks ever made against the police department. After waking up from a 17-month coma, he can’t remember much – except that his partner was killed; his girlfriend left him after the attack; and he lost one of his legs and is now outfitted with a highly sophisticated synthetic limb.

Suffering from depression, mental atrophy, trauma-onset OCD, PTSD and the “psychological rejection of his synthetic body part,” John returns to work at the behest of longtime ally Captain Sandra Maldonado. By mandate, every cop must partner with a Synthetic. And despite his passionate aversion to androids, John is paired up with a battle-ready MX-43. But he abruptly terminates his partnership after the synthetic discovers incriminating information about him. So technician Rudy Lom introduces John to Dorian, a discontinued android with unexpected emotional responses. Although such responses were deemed flaws, it is in these “flaws” that John relates to Dorian most. After all, John is part-machine now, and Dorian is part-human. John and Dorian’s understanding of each other not only complements them, it connects them.

John Kennex lost his leg two years prior in a firefight as he was helping his wounded human partner, Martin Pelham, (against the suggestion of an MX-43 model android) away from the ambush by an insurgent group called inSyndicate. However, most of his right leg is blown off and members of inSyndicate toss a bomb as they leave, putting Kennex in a coma for seventeen months. His memories are still hazy, even though he has help from a black-market doctor, The Recollectionist, with a Memory Recollection machine.

At his apartment, his former captain, Sandra Maldonado, calls him back into the office (despite the police psychiatrist being against Kennex’s return to service … ever), as a biotech transport was ambushed by inSyndicate members. Kennex is partnered up with an MX-43, and the evidence at the crime scene (including missing programmable DNA and a canister of Myklon Red) causes Kennex to flash back to his ambush, recalling a similar canister there. While at the crime scene, Detective Valerie Stahl introduces herself to Kennex. She provides the information that while it might be considered that the Khmer Black are responsible for the attack, her knowledge and intuition as an Intelligence Analyst says that they are not responsible due to the day being the last day of the Cambodian New Year. On the return to the Precinct, his MX starts peppering him with questions about his petit mal seizure, so he pushes the MX-43 out of the car on the highway, which means he needs a replacement.

At Maldonado’s orders, Rudy Lom sets Kennex up with the solitary cleared model: a DRN. The DRNs, precursors to the MX-43s, utilized a program called Synthetic Soul, which enabled empathy … and lead to a stereotype of having emotional problems. Rudy, an understanding sympathizer, counters Kennex’s derision with the reminder that everyone has problems, DRNs and humans alike, and has him wake up the DRN named Dorian, who has been unconscious for four years after being decommissioned. He was due to be recommissioned to clean tiles on the CRN space station. Dorian’s facial recognition IDs Kennex, who tells him to update his files, and then the duo heads back to the Police Precinct, bristling in the car.

Kennex repeatedly calls Dorian “Synthetic”, which he doesn’t care for, and Dorian asks about the St. Christopher medallion from Anna Moore hanging from the rear mirror, but Kennex declines to answer.

Meanwhile, Pete Vogel, one of the cops from the Detective and Investigations, Delta Division, is ambushed and abducted by members of inSyndicate, who shoot his MX-43 and mask him with the equivalent of a plastic hood. Back at the department, Kennex and Dorian interrogate one of the robbers, Trevor Janns, who was left behind because of a gunshot wound to his leg. Kennex turns to civil rights-violating abuse, but Dorian notes that Trevor shot himself in the leg, and he reveals that he needed to get away and he won’t be safe anywhere. Trevor does give them an address to an apartment building where Vogel is being held, and while they head over to retrieve Vogel, Trevor gags up a little flashy magnetic device in the precinct bathroom on his way to prisoner transport.

At the apartment building they find something that looks like a bomb wired up by a sparking trip wire to a bulletproof glass box holding Vogel. However, there’s a security camera in the room and Vogel is trapped in the box with a gas canister of some kind … which goes off after Kennex calls the prisoner transport to warn them of an ambush, but it’s too late.

Trevor is freed by inSyndicate members and Vogel is killed. In the aftermath outside the apartment, Dorian takes a blood sample, injects it into his neck, and sends the data to Rudy, who reveals that the canister contained a mix of Myklon Red and programmable DNA, which targeted the mandatory inoculations Vogel received as a Police Officer, overloading his system with diseases. At the precinct, it’s discovered that one of Vogel’s case files (#6663) is missing, and Detective Valerie Stahl remembers that he couldn’t log into his account that morning. Kennex proceeds to anger Dorian before bolting back to the Recollectionist to retrieve more memories, as he thinks he’s missing something … which he is.

The smoke in Kennex’s memory of the ambush clears slightly to reveal that Anna Moore is one of the inSyndicate members, and threw the Parabolic Pulse charge in his direction.

Dorian arrives in the nick of time and shocks Kennex back, as the procedure was causing great strain and a bad nosebleed. They talk over the case so far at a noodle joint, and when Kennex’s leg calibration monitor fails, Dorian recommends olive oil to lubricate the joint. They head to a Droidax Industries recycling place to get access to Vogel’s MX-43’s neural net to retrieve the final footage of Vogel’s abduction, and they learn that Vogel logged something into evidence that inSyndicate claim wasn’t his, something that inSyndicate is looking for (they were working on a Synthetic body in their hideout before heading out to abduct Vogel).

Above the precinct, the inSyndicate members wire up Myklon Red canisters to an oxygen supply on the rooftop before setting up a localized EMP of sorts that, in conjunction with the trigger Trevor left behind, knocks out the precinct’s MX-43s, even as Kennex is on the phone with Maldonado to have her evacuate the precinct because he’s anticipating a raid or attack to get the evidence.

Kennex and Dorian rush back to the precinct and make their way toward the roof where Maldonado, Stahl, Paul and a few other officers, have engaged with some of the inSyndicate group in a shootout.  Reinhardt, the leader of this inSyndicate group, escapes into the precinct, taking a can of Myklon Red with him. He gases one police officer before making it to the Detective and Investigations division where he is engaged in a shoot out with Kennex and Dorian. Stahl and Paul also arrive and before Reinhardt can gas Stahl, Kennex shoots him in the shoulder.

In the aftermath of the failed raid, they can’t find Vogel’s logged evidence (revealed to be a female synthetic head) in the sprawling evidence locker, Dorian promises to keep trying to uncover Vogel’s deleted case file, and Rudy revives the MXs in the precinct lobby. Maldonado tells Kennex that she requested Dorian as his partner as they’re both special. Dorian and Kennex, now on a first name basis, drive off to their next case.[1] 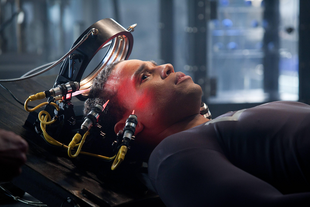 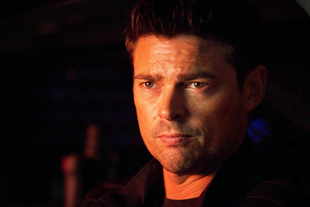 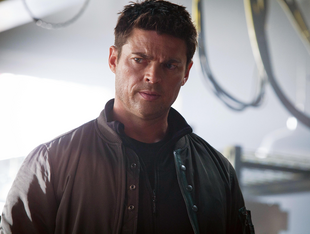 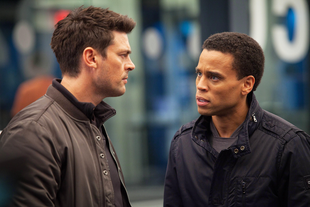 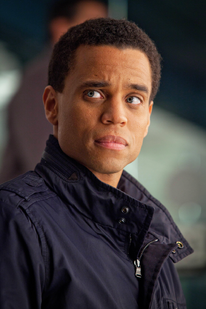 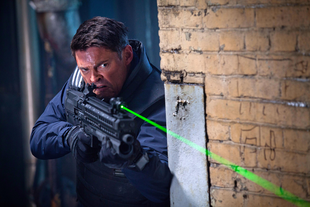 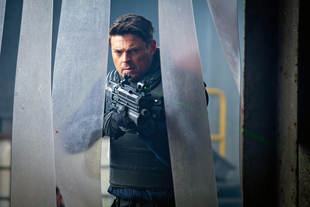