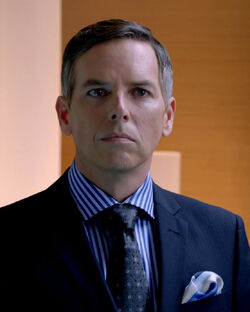 Peter Newsom was the in-house council for Synturion.

Newsom had been with Synturion since Kay Stenson had taken the company public. When Mrs. Kasden sued the company over the death of her son Aaron Kasden, it was Newsom who defended the company. Mrs. Kasden stated that Newsom lied about Aaron, making him appear to be a criminal. The company were cleared of any charges in the matter.

Newsom was killed by Emily Wilson when she hacked his Synturion Smarthome Security System. She caused the system to believe that there had been a fire in the house and that there were no living things inside. The house was then sealed shut and all the oxygen was sucked out of the house. Newsom died of acute respirtory failure. Wilson's motive was the death of Aaron, her friend, who had been coming to visit her the night he was killed and he had entered the wrong house and the Smarthome Security System of that house identified him as an intruder and killed him.