Perception is the tenth episode aired of Season 1. For the original production order of the series, Simon Says should be viewed tenth. (see season 1 episode list)

When Detective John Kennex and Dorian investigate the simultaneous and sudden deaths of two genetically-enhanced - or "chrome" - children, a fatal dose of the perfect designer drug appears to be the cause. As the investigation unfolds and a recent drowning victim is mysteriously connected, the case takes an unexpected turn. Meanwhile, Kennex endures painful flashes from the past and pays a visit to the Recollectionist.[1]

An attractive teenage girl wanders in the woods. All around her, she sees glistening mathematical equations fill the park. When she comes across a bee hive, she stands in wonder as the bees harmlessly swarm around her. Elsewhere, another teen conducts an empty orchestra, hearing and seeing her beautiful music fill the concert hall. Suddenly, both girls collapse; their dilated eyes wide open in a dead stare.

John Kennex wakes from a dream about Anna, his ex-girlfriend, and posts an electronic note to himself that she had given him something. Captain Maldonado calls with information on a new case; two Mendel Academy students who died within minutes of each other. Kennex arrives at the park annoyed at Dorian for telling Maldonado that he was still at home. He tells Dorian not to disclose his movements. Dorian asks why he turned off his locator chip for 2 hours, but Kennex refuses to answer him.

As he examines the body of Scarlett Davis, Kennex talks to Valerie Stahl who is at the morgue with the second body. Standard drug panel on the second girl, Elinor Church, came up clean, but Stahl sent a blood sample to the lab. In Scarlett’s pocket, Kennex finds a sealed container whose biometric lock responds to her DNA. Stahl also finds one among Elinor’s personal effects, but both containers are empty.

At the precinct, Stahl is asked to liaison with the girls’ parents. Since Scarlett and Elinor were both “chromes,” or genetically engineered humans, Maldonado feels Stahl, being one herself, is best suited for the job. Stahl accepts reluctantly.

The parents know nothing about drugs, but the lab finds evidence of a new type of drug in the victims’ blood. Based on the information, Dorian identifies a third victim; another Mendel student named Lila Hoving who died seven months ago. Although Lila died of drowning and not an overdose, her blood also contained the same compound. Based on on-line chatter, it appears the three girls were friends.

Heading out to visit Lila’s mother, Kennex has a flashback of Anna. He had one earlier at the park as well, and now his hand is shaking as he takes a small pill. Dorian, aware of Kennex’s drug use, confronts him in the corridor. The drug, Membliss, opens up memory clusters but has serious side effects. Kennex insists he needs the pills to help him remember what happened at the ambush, and assures Dorian that he has it under control.

Kennex and Dorian interview Mrs. Hoving in her garden. Lila was not a chrome but a “natural” attending Mendel Academy on a scholarship. When she drowned and her friends refused to talk, Mrs. Hoving hired a private investigator to find out what happened. He was able to get recordings of the friends, Elinor and Scarlett, discussing being with Lila that night. Unfortunately, the recordings were erased due to a magnetic surge while in police custody. Mrs. Hoving is surprised when Kennex tells her that, while not impossible, such an occurrence is unlikely.

Meanwhile at the academy, Stahl interviews Jessica, Lila’s classmate and the only other natural in their grade. Jessica does not know about drugs, and she did not know Elinor or Scarlett very well. She tells Stahl that Lila had aspirations to get along and to compete with the chromes, while she herself does not feel she belongs at the academy.

Kennex and Dorian join Stahl at the school. While Dorian goes off to search the girls’ dorm rooms, Kennex and Stahl interview Marshall who was friends with Scarlett and Elinor. Marshall flatly states there are no illegal drugs at Mendel. When asked about new drugs that are not yet illegal, he would only say “you wouldn’t understand.”

In the mean time, Dorian finds a bio-locked container in Scarlett’s room. He opens it to reveal a small pill inside. Lab analysis shows the pill to be the ultimate designer drug, with Scarlett’s DNA attached to the molecules. From the fine, uniform chemical layers, Rudy Lom concludes the pill was printed by a pharmaceutical-grade ChemPrinter.

Dorian tracks a Chemulon-6 printer to a residence near Mendel Academy. The owner is deceased, but his son, Julian Wollenberg, was a student at the school until he was expelled last year. Thanks to a safety backup feature of the printer, Dorian is able to link all the victims to the Wallenbergs’ unit. According to the printer log, Lila only took the single dose while Scarlett and Elinor had been taking theirs for a year. The fatal doses were a thousand times stronger. As they drive to the Wallenberg residence, Kennex suffers another flashback and a blackout, causing him to crash the cruiser. Dorian is fortunate to survive the accident with only one ear missing.

Julian Wallenberg greets Kennex and Dorian at the door clearly under the influence of his own drug. Even before Kennex can explain their visit, Julian begins to tell them about the printer and states he didn’t come forward because Kennex doesn’t believe him. To confused Kennex, he says their conversation already happened. The drug, Vero, expands the mind and enables the user to realize his full potential. In Julian’s case, it appears to show him words from future conversations. He says that someone hacked the printer to kill Scarlett and Elinor, and Lila’s death was unrelated. Kennex does not believe him, and the conversation ends where it started.

Back at the precinct, Stahl has uncovered some interesting communication between Scarlett and her father. A couple of weeks after Lila’s death, Scarlett was told by her father that he “took care of it.” It upset her enough that she never spoke to him again. They will need to interview the father.

After the shift that evening, Kennex meets Maldonado at a bar at her request. She saw Kennex take the pill, and wants to know if he is using alternative therapies. He tells her that he is remembering things about Anna. Maldonado advises him to build on recent success, but Kennex is still focused on the past and is consumed by the need to discover what happened. She warns him about the danger of obsessing on revenge, and informs him that they will need to talk to Internal Affairs now that he is remembering.

Ignoring Maldonado’s advice, Kennex returns to the recollectionist for another session. This time, he remembers what Anna had given him; a Russian nesting doll. Back at the apartment, he examines the doll. Having discovered no obvious clues, he looks over his electronic notes which now cover many walls. Then he takes the doll to McGinnis at the police lab. McGinnis has been helping him “off the books” with evidence from the ambush. He leaves the doll with her for analysis, hoping to find something they can use to trace Anna.

Kennex and Dorian visit Harvey Davis, Scarlett’s father, at home. Davis is shocked and distressed to hear his daughter did not die from an accidental overdose. Against his lawyer’s counsel, he decides to tell them what really happened. He confirms Scarlett and Elinor were with Lila on the night Lila drowned. They had taken the drug together, but Lila stayed behind when the others went back to school. Scarlett had wanted to tell the truth, but Harvey decided to cover up in order to protect her reputation. He paid to make Mrs. Hoving’s private investigator and the evidence disappear, for which his honest daughter never forgave him. Davis says Mrs. Hoving said they would all pay for it, and now they have. It appears Mrs. Hoving knew a lot more than she let on.

Meanwhile, Detective Paul finds another bio-locked container in Julian’s room. It contains an encrypted image stick. They bring Julian in for questioning. Kennex and Dorian suspect Mrs. Hoving blackmailed Julian into overdosing the two girls, and the stick may contain evidence against her. But they are wrong. Julian finally decides to tell them what happened.

According to Julian, Lila was under a lot of pressure to succeed, with her mother riding her hard. He loved Lila as she was, but she never felt she was good enough. He says he did not want her to take Vero, which works differently on naturals. Then he plays for them the recording on the image stick – the last message from Lila.

The video shows Lila alone on a beach, recording her last thoughts for Julian. She tells him that, having taken Vero, she understands why he did not want to her to take it. She can see how limited she is, and that she will never be good enough. She says both Julian and her mother see something in her that isn’t there. She then walks into the water and disappears.

They play the recording for Mrs. Hoving. Although the drug was not directly responsible, she still blames it for Lila’s death. She breaks down and confesses to hiring a hacker to kill Scarlett and Elinor. When their parents destroyed evidence and took away her justice, she was consumed by rage. There was no peace for her, and she wanted to make them feel what she felt. Searching through the house, Kennex finds a room filled with numerous electronic notes Mrs. Hoving kept on circumstances surrounding Lila’s death. He stares at the notes, recognizing his own obsession in them.

Back at the precinct, Kennex is interviewed by Officer Reynolds from Internal Affairs. Reynolds questions him about Anna, and suggests he may have failed to follow protocol in pursuing the relationship. He implies Kennex remembers more than he admits, and is using the amnesia as an excuse to hide inconvenient details. Kennex cuts the interview short and walks out.

At his apartment, Kennex has another flashback of Anna. He surveys his notes and makes his decision. Having deleted all notes on Anna and the ambush, he is deep in thought when he receives a call from McGinnis at the lab. She found nano-circuitry in the doll’s pigment. It is a transmitter, and someone has been listening – the last upload was just seven hours ago.

"Well, look who it is. Benedict Android."

"It’s my job to know about you. You’re not just a badge number and a questionable haircut."

"I’m sorry, could you speak up, please?"

- Dorian, with one ear bandaged, to John Kennex

"When you’re surrounded by perfect things, you learn to appreciate the beauty in flaws." 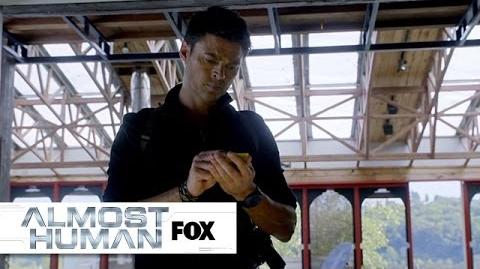 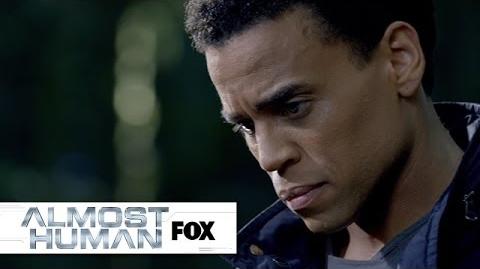 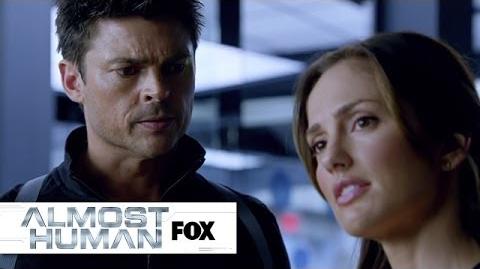 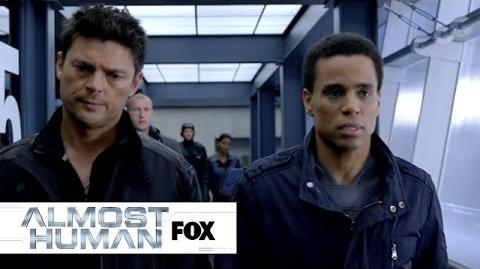 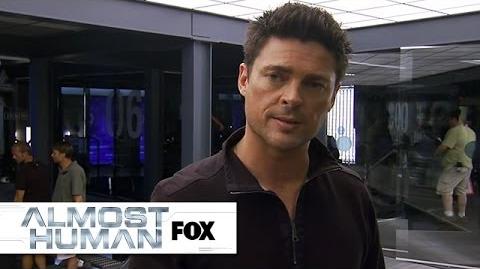 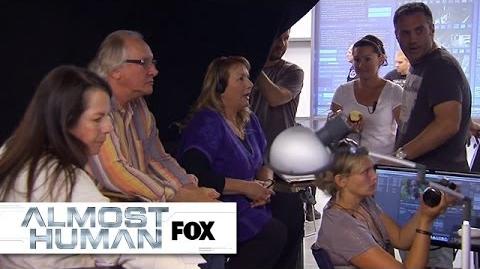 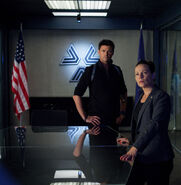 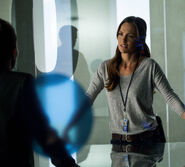 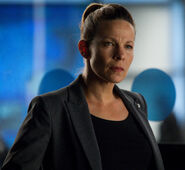 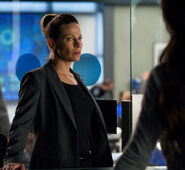 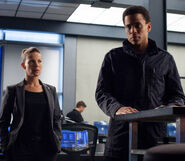