Paper is a thin material produced by pressing together moist fibers, typically cellulose pulp derived from wood, rags or grasses, and drying them into flexible sheets.[1]

Paper has nearly been rendered obsolete in the Almost Human universe. Electronic technology such as tablets, electronic paper, and mobile phones are favored. In "You Are Here", Anton Cross owned a safe-deposit box where he kept ripped up sheets of paper with numbers on them. Kira Larsen explains that Anton wrote down his phone number on a paper to give to her when he first asked her out. She considered him old fashioned and he had told her that he was going to keep the pieces that she had ripped up.

Using the pen that Kira gave to Detective John Kennex as a thank you, John wrote a note to Detective Valerie Stahl using that pen and paper he got from a drawer in the Reception area of the Detective and Investigation unit. 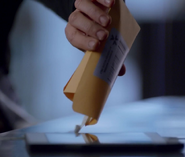