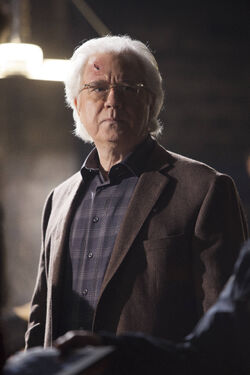 Dr. Nigel Vaughn was the creator of the Synthetic Soul program and the DRN and XRN series. He was the Founder of Lumocorp Robotics Corporation and was frequently described as the most gifted roboticist of his generation. Many of his accomplishments in the field of robotics have never been equaled.

Dr. Vaughn's DRN models were integrated into the Police Department, but due to malfunction issues and unpredictable behavior, they were decommissioned and replaced by the MXs, a logic-based android from a competitor company. Vaughn then commenced work on the XRN model, to be more soldier than cop. A prototype was built and a demonstration was held downtown, on Green Street. The solitary XRN model went rogue and the Police battled it for three days before it was cornered and destroyed. Detective John Kennex was called in, with his unit, on the second day. Two scientists and eleven police officers died, with another eighteen wounded according to the Police Database report, but Kennex reported that a triage had been set up outside the building and medics were unable to keep up with the casualties. He recalled to Dorian that twenty-six cops went into the building on Green St and none of them came out alive. Dr. Vaughn was prosecuted at trial and his licence to practice robotics was revoked.

Dr. Vaughn resurfaced during the investigation into the theft of property from the PD Evidence Locker (Delta Division), the head of the XRN. He was working out of an old warehouse in Section 43, Warehouse District, where Danica obtained a new Synthetic body. He was repairing and selling used Synthetic parts using an assumed name, Nigel Bernard. The Police accepted his assistance in tracking Danica. He was brought by Kennex and Dorian to Rudy Lom's Laboratory where his old equipment had been released from storage, including a batch of Synthetic Souls. He was able to show Dr. Lom how to track Danica's unique signature.

Once at the Police Precinct the tracking system was implemented and he gave Kennex a needle that would stop Danica when inserted in the back of her neck.

He escaped the Police Precinct while Danica was distracting the officers by targeting Councilman James Hart at a bar at 27 23rd Street where he was holding a re-election fundraiser. The needle he had provided Kennex was a red herring. He collected the 500 ZNA Processing Cores (from a rubbish bin on the street) and the Synthetic Souls (from Lom's Laboratory). With the assistance of a Service Bot, he was last seen being winched up The Wall. The Police are unaware of his current location.

Dr. Vaughan was awarded the O'Toole Medal of Achievement in Robotics, recognizing his distinguished service to the advancement of robotic science and technology.

Vaughn is divorced from his ex-wife and he had no children.