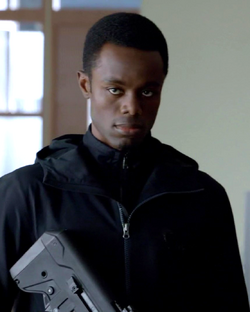 Michael Demarais is a member of the Holy Reclamation Army.

Michael Demarais was originally believed to be a part of the hostage situation at the Sanderson Corporation. Dorian and he engaged in a firefight on the 15th floor of the Sanderson Building and Demarais was shot and killed. When Dorian performed a facial recognition scan to ascertain Demarais' identity, it glitched and Dorian and Detective John Kennex discovered that Demarais was actually Gregor Stone who was using a Face Maker to hide his original identity.