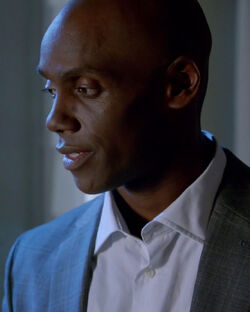 Michael Bennett was a financier in the City.

A year after the death of Aaron Kasden, Emily Wilson hacked the Synturion Smarthome security system of the Bennett's house to cause the death of Michael and his wife, Linda.

Michael was returning to the house after work around 10 pm, due to the Futures meeting running late. He was on the phone with his lawyer when he was asked to provide a statement to the media, as they were requesting one from the Bennett's in relation to the death of Aaron due to the memorial in Aaron's memory being held downtown. Michael declined to provide a new statement.

Linda was meditating in the house after receiving twice as many death threats in the mail that day. Michael tried to placate her, but she said informed him she was going for a swim. Michael settled into the living room, with a scotch as provided by S.A.M., to look over the ticker. It was at this time that Emily hacked the system and proceeded to show news reports in relation to the death of Aaron. S.A.M. was glitching and was unable to assist Michael or restore the functions to the house.

Meanwhile Linda was trapped under the glass cover of the pool. Michael was unable to reach her, as the doors were all locked and sealed. He broke through the glass of a door using a large pot and he was trying to break the glass of the pool cover when the house system opened fire on him as an 'unidentified intruder' and killed him.

Since the death of Aaron, the Bennett's had received 56,312 threats and 19,418 of those were death threats.