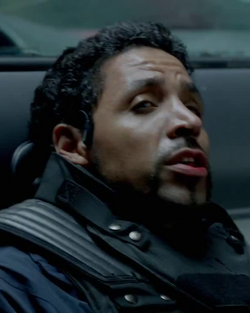 Detective Pelham was a member of the investigation and tactical raid of Case #34P-C91244, under the lead of John Kennex. During the raid, Pelham was mortally wounded and died at the scene of the ambush. John had come to his aid, after Pelham had called him for assistance, and the MX that accompanied John ascertained via a Scan Biomed that Pelham's blood pressure was dropping and that his celiac artery was blown apart. The MX reported that there was nothing that could be done to save Pelham's life. As such the MX deserted both John and Pelham, even though John had ordered him to help him get Pelham out of there. John attempted to carry Pelham out of the danger area but John was struck in the leg, causing him to drop Pelham who died either as he was dropped or shortly thereafter.

He is survived by his wife, Maria and son, Marty, Jnr.[1]

"They were ready for us, John. How did inSyndicate know we were coming? How did they know? " - [2]