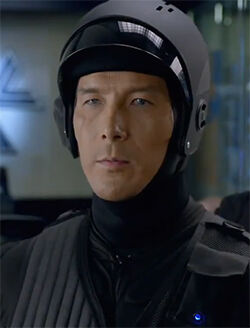 The MX-43 series is a battle-ready militarized humanoid android closely resembling male human beings. Though similar in appearance, they do not all look exactly alike. However, they are all programmed to "think" alike and follow orders precisely.

Designed by a competing company of Lumocorp Robotics Corporation as a replacement for the "flawed" DRN series of androids (which includes Dorian), their ability to adapt and "think" for themselves has been replaced by a standardized set of protocols. They do not "feel" or have compassion, and they are incapable of adjusting their protocols situationally. MX-43's intelligence is based on first order predicate calculus. In order to make logic-based, rule oriented decisions, it is designed to feel nothing.[1]

An MX-43's neural net can be accessed via a port on the right side of their face. This allows access to their short term memory.

inSyndicate developed a frequency emitter which caused all the MX-43 units within range to go offline immediately.[2]

Their enhanced durability is... Questionable. While in Blood Brothers, the assassin apparently used Armour Piercing ammunition, which would imply it's necessity for damaging an MX pattern droid, but in Unbound the XRN gunned down several clad in full tactical equipment, with only a few rounds of ammunition. In the meantime, Dorian withstood being impaled through the abdomen by a piece of rebar, and in another episode, remained operational after a sniper bullet through the abdomen.

The MX-43 Class Android Unit is a combat-ready synthetic law enforcement solution designed to assist human officers in investigations and dangerous situations. Powered by state-of-the-art logic-based A.I. software, MX-43s are designed to be an officer’s ideal assistant. They can easily parse quantifiable variables, and separate them into relative importance and priority. They will also obey nearly any order they’re given.

Several types of MX-43 are available for departmental deployment, including Standard Issue, Community Service, Tactical Combat, and others.

The outer body of the MX-43 consists of synthetic body parts, composed of silicon and carbon fiber, which results in superior damage Resistance. A top layer of realistic epidermis (aesthetic overlay) provides a genuine look and feel for seamless workplace integration.[5]

Data calculations deliver the destination of any projectile weapon nanoseconds after firing.[6]

MX units store experiences as data, all uploaded to a centralized memory database on a regular basis. This database is universally accessible to all MX models. This enables all MX models to function not only on their own memories but on countless memories of all the MXs across the city. This memory transfer allows all MX units to make the most statistically sound decisions during all tactical situations.

For example, unit 263 has been through 13 raids and can recall every detail of those raids.[10]

According to the MX development site, the MX partner implementation program holds unlimited potential for success. Since partnering trials began, collective drops in field operation failure have reached an all time low.[11]

"MX units are logic-based, and rule oriented. They have no true free will, and they are designed to feel nothing. I'm not like them."

MX-43 units in order of appearance. A strike-through indicates the unit was destroyed.

Charging area of the Police Precinct