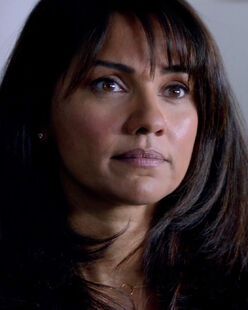 Mrs. Kay Stenson is the CEO of Synturion.

Mrs. Stenson got into home security because she had been assaulted at age 15. She was home alone when three men entered the family home, intending to rob the house. She hid in the closet and called the police. It took the police ten minutes to arrive, but within that time the men found her hiding and assaulted her.

Synturion is a successful company which has gone public.

On the anniversary of Aaron's death, Emily Wilson targeted those she believed were responsible. This included Kay. Emily hacked into the Synturion server and took control of the building and the new S.A.M. androids in order to attack Kay. Detective John Kennex and Dorian entered the building with assistance from Nico Galasso. They were able to stop Emily and prevent her from killing Kay.