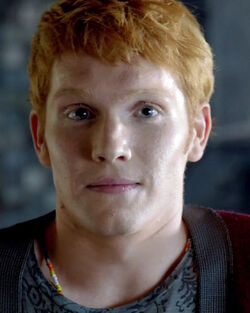 Julian Wollenberg was chromed by Edgar Wollenberg and his wife late in their life. Julian lives in Grey Harbor with his invalid mother at 14 Upper Riverside Drive.

Julian was a student at Mendel Academy until he was expelled in 2047.

He was the supplier of Vero for students at Mendel Academy.

He met and fell in love with Lila Hoving while they were both students at Mendel. He had not wanted Lila to take the drug as she was a natural and it was designed only for chromes. She took it against his advice and later committed suicide after it revealed to her that she was limited. She left a recording for Julian before she walked into the sea. Julian could be heard calling out her name at the end of the recording. He kept it hidden in a biolock capsule behind a picture of Lila in his bedroom. The capsule could be opened by his DNA.

His father had purchased a Chemulon-6 ChemPrinter in order to print his own drugs as he was on experimental treatments prior to his death seven months ago. Mrs. Hoving hired a hacker to up the dosage to a lethal quantity for Scarlett Davis and Elinor Church, who were friends with Lila and were also with her the night she died.

Wollenberg information on the Police Database