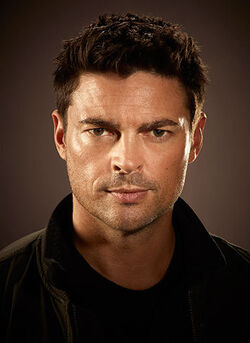 John Reginald Kennex is a Detective with the Detectives and Investigation division, Delta section of the City. He has a hard-nosed whatever-it-takes personality, and isn't afraid to bend the rules (or break them) if it means putting the "bad guys" behind bars.

John survived one of the most catastrophic attacks ever made against the police department. After waking up from a 17-month coma, he can’t remember much – except that his partner, Detective Martin Pelham, was killed; his girlfriend, Anna Moore, left him after the attack; and he lost one of his legs and is now outfitted with a highly sophisticated synthetic appendage.

Suffering from depression, mental atrophy, trauma-onset OCD, PTSD and the “psychological rejection of his synthetic body part,” John returns to work at the behest of longtime ally Captain Sandra Maldonado (Lili Taylor). By mandate, every cop must partner with a robot. And despite his passionate aversion to androids, John is paired up with a battle-ready MX-43. He abruptly terminates the partnership, however, after the robot discovers incriminating information about him. So technician Rudy Lom (Mackenzie Crook) introduces John to Dorian (Michael Ealy), a discontinued android with unexpected emotional responses. Although such responses were deemed flaws, it is in these “flaws” that John relates to Dorian most. After all, John is part-machine now, and Dorian is part-human. John and Dorian’s understanding of each other not only complements them, it connects them.

As he adjusts to working with his new partner, John also must learn to get along with his new colleagues, including the eager and somewhat starstruck Detective Valerie Stahl (Minka Kelly) and the distrustful Detective Richard Paul (Michael Irby), who does not welcome John back with open arms.[1]

John Kennex and Sandra Maldonado have a prior personal history. He is the only person in their division who will call her Sandra. There is a considerable amount of mutual respect with them both and while he might not always agree with all her decisions, he does respect her, but will also call her out on decisions he disagrees with. She is like a big sister to John.

Richard Paul is not pleased to see John's return to active duty. Richard had become the Captains go-to-detective in the division while Kennex was on indefinite medical leave. John's return brings out the envy and distrust in their relationship, which is not assisted by the botched raid Case #34P-C91244 led by John which resulted in the deaths of people Richard knew.

John has an 'interesting' and slightly fractious relationship with Rudy. They went through some things prior to John's accident and their interactions are colored with a friendly sparring banter.[2]

John had been involved in a romantic relationship with Anna Moore. When John awoke from his coma, 17 months after the ambush, Anna had disappeared. He discovered that she was the one to set off the parabolic pulse charge that nearly took his life. He had not known of her part in the ambush until he visited the Recollectionist to unearth his memories from the raid. While he had kept a message saved from her from 738 (2 years and 8 days) days prior to his return to work, where Anna was apparently overseas on a holiday and would not be back to see John for another week. He deleted the message after discovering that she was the one to inform inSyndicate of the police raid and had partaken in the ambush.[3]

John Kennex and Valerie Stahl seem to have a mutual respect for one another as they also share love for Bourbon and Soccer.[4]

At first, he doesn't get on really well with his new android partner, Dorian, but they later form an unlikely friendship. As in the end of the first episode, John tells Dorian to call him by his first name instead of 'Detective'. Some people have implied that they have a more close relationship, in terms of romance.

John Kennex was personally investigating Anna Moore, the ambush and inSyndicate. He had a series of electronic sticky notes up on the glass divider walls in his apartment. The order that Kennex looks at the notes is listed below, as well as the color of the notes.

- John Kennex to Dorian in the cruiser (Skin)

"Who's a happy toaster?"

"What genius put you in charge?"