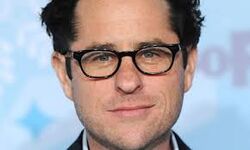 Jeffrey Jacob "J.J." Abrams (born June 27, 1966) is an American film and television producer, screenwriter, director, actor and composer. He is well known for his work in the genres of action, drama and science fiction. He is most known for his work on Fringe and Mission: Impossible – Ghost Protocol.

Abrams was born in New York City and raised in Los Angeles, where he attended Palisades High School. He is the son of television producer Gerald W. Abrams and executive producer Carol Ann Abrams.