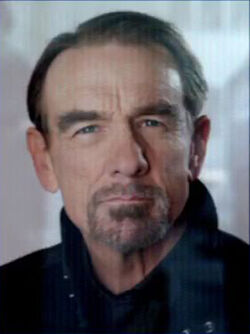 Edward Kennex was the father of John Kennex and was a detective with the City's Police Department.

John idolizes his father and credits him as the reason for why he joined the police force.[1]

Before he became a Detective, Edward Kennex was a patrol office in the downtown area. It was considered to be a tough beat, as it was gang controlled. Many of the cops in that area were corrupt. His unit took down a drug dealer and seven million dollars in cash, under the floorboards, was discovered. The task force leader ordered all members of the unit to take a cut, but Edward refused. The leader threatened Edward with a scatter gun to his head, telling him to take a cut like everyone else, but still Edward refused, even with the threat of him being shot and the other cops calling it in as a ten-double-zero, officer down. The leader did not follow through on the threat. A month later Internal Affairs busted the whole unit for corruption, except for Edward Kennex.[1]

Two weeks after he visited Michael Costa in prison, in April 2038, Edward was killed in the line of duty. He had been under investigation by Internal Affairs for stealing robotic body parts from the Evidence Locker room and selling them on the black market. After his deal Internal Affairs sealed all of Edward's case files.[1]

The last case Edward Kennex worked on was dubbed the 'Straw Man' case. Michael Costa was arrested, tried and found guilty of the 21 murders. The victims were teenage runaways and transients, both male and female. The modus operandi of the killer was to remove all the internal organs and replace them with straw, hence the media dubbing him the 'Straw Man'.

On November 14, 2037, Michael Costa was arrested after he was found wandering in a park near to the latest victim. On his hands and clothing was DNA and blood from multiple victims of the Straw Man. At the subsequent trial, Edward was the lead investigator.

Edward came to believe that Costa had been abducted the night before the final murder and was moved to the park with planted evidence on him. He visited Costa in his cell in April 2038, using the alias Tony Ferraro. He told Costa that he believed he had been framed and was working on new evidence to clear Costa.

He had noted that all the bodies were flat footed. This was caused by the bodies being bio printed using an older model organic bio printer which had been stolen from the Evidence Locker room. The bodies found by the police and stuffed with straw were replica's of the actual victims. Edward was killed as he was close to discovering the truth and that the Officer in charge of the Evidence Locker room, Silas Grant, was working with the real serial killer. Edward was under investigation at the time of his death by Internal Affairs for stealing and selling objects on the Black Market. This was discovered to be a ploy to destroy Edward's credibility, by either Glen Dunbar or Silas Grant.[1]