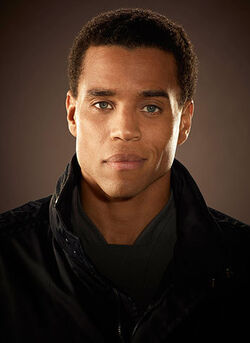 Dorian is a "flawed" DRN series android that was designed to be a partner for a human detective with the Police Department.

Technician Rudy Lom introduces Detective John Kennex to Dorian. He possesses some level of emotional awareness that the MX-43 series lacks, and he was mothballed after these emotions were deemed a "flaw." After Detective Kennex terminated the MX-43 unit that was assigned to him (by way of an "accident"), it is decided that this flaw would be a good match for Detective Kennex. Since Detective Kennex also has "issues" of his own, making Dorian more relatable to him.[1]

Dorian was decommissioned in January 2044, 4 years and 3 months before he was re-activated to partner with John.[2]

A Luger Test had been previously administered to Dorian. He does not believe they are an accurate test.[3] It is unknown if he passed or failed the test.[4]

While Dorian has been designed to respect the chain of command, there are questions as to why the Captain chose to pair him with John Kennex. John has been told by Sandra that they were paired together because they were both "special," but she has not enlightened John any more than that. Large sections of Dorian's past have been redacted from the report on him.

Sandra treats Dorian like any of the other officers under her current command.[5]

Dorian has been moved out of the Precinct housing with the MX-43s, at his request. He now resides with Rudy Lom in his Laboratory.[6]

Personnel Notes (For eyes only - Clearance D5 or above)[]

- Dorian to John Kennex in the cruiser (Pilot)