Disrupt is the eleventh episode aired of Season 1. The order of airing and production match for this episode.

Detective John Kennex and Dorian investigate a deadly crime from the future when a “smart home” goes bad and turns on its occupants.

Dorian lies in stasis in Rudy Lom's Laboratory, hooked up to a computer. Examining the file system, Rudy spots point-of-view images of a child in a hospital bed playing with a toy train. He quickly navigates away from the unusual files as Dorian wakes.

Dorian is perturbed to find himself on Rudy’s table, away from his charging station. Rudy explains he was running routine maintenance, but Dorian is upset that his space was invaded. John Kennex, arriving to pick up his partner, is amused to find the roommates arguing. Rudy apologizes and Kennex suggests he is overreacting, but Dorian is still unconvinced as he gets ready for the shift. As soon as the partners leave, Rudy resumes his examination of Dorian’s image files. His concern grows as the computer displays a fatal error.

At the end of a long and difficult day, Michael and Linda Bennett try to have a quiet evening at home with assistance from “Sam,” holographic butler and the personification of their smart home. This is the anniversary of the death of Aaron Kasden, a teenager caught trespassing and shot by the Bennetts’ security system. Trying to clear her mind, Linda goes for a swim. As Michael sips his scotch, suddenly a news report of Aaron’s death starts to play. He orders Sam to turn it off, but the hologram is unresponsive. At the same time, the cover over the pool closes and traps Linda under water. With Sam malfunctioning, Michael is forced to break the door to get to the pool. When he starts to bang on the pool cover, the security system identifies him as a threat. He is fatally shot as Linda drowns below.

Kennex and Dorian are called to the scene by Captain Maldonado. The Bennetts were killed at the exact same time Aaron was a year ago, so she is treating the case as a homicide rather than a malfunction. The original case was very public and many people were upset about the acquittal. Considering the public sentiment, the killer could have been anybody. Speaking with Sam, Dorian confirms that the home was indeed hacked. The hacker covered his tracks, but Sam is able to provide them with the security log containing numerous threats the Bennetts received in the past year.

As they wait for an interview at Synturion, the maker of the smart home security system, Dorian chides Kennex for lying about Detective Paul. He heard Kennex tell an officer at the scene that Paul is out having surgery for an embarrassing condition, but he knows it is only a “personal day.” When Dorian mentions the need to respect people’s privacy, Kennex realizes he is still upset about Rudy. As he lectures Dorian on the messiness of human connection, a Sam approaches. This Sam is not a hologram but an android, a new product meant to serve as a personal security guard away from home. As they follow Sam to the interview, Dorian is momentarily disoriented by a flashback of the little boy.

At the interview, Kennex and Dorian are assured by CEO Kay Stenson and Peter Newsom, the Synturion lawyer, of their full cooperation. They have launched a full-scale internal investigation into the security breach, but they suspect it is the work of an outside protestor. They had received many threats and cyber attacks after the Kasden verdict. The most aggressive group protesting is called DISRUPT.

Meanwhile, Valerie Stahl interviews Aaron’s mother. Cynthia Kasden was at a vigil in her son’s memory last night. She still believes the smart houses should be against the law, but she had nothing to do with the Bennetts’ deaths: nor does she know of any friends who would avenge Aaron – he was a loner who spent a lot of time on the computer. Although they never found out why he was trespassing that night, he was not a criminal as portrayed by Newsom. Stahl asks for access to Aaron’s computer.

On the way back to the precinct, Dorian is deep in thought over the strange images. He tells Kennex that they felt like childhood memories, which is impossible since he was never a child. He suspects the fault was caused by something Rudy did earlier. As they drive on, suddenly the city lights go out. Then video signs on the sides of buildings all light up with the photo of Aaron, accompanied by the words “Justice for Aaron.”

DISRUPT has claimed responsibility for the blackout. They are marking Aaron’s anniversary and protesting against companies who put dangerous technology into the hands of the consumer. Cyber Terrorism thinks DISRUPT may also be responsible for the smart-house murders, so Synturion employees are warned to disable their smart security systems at home. The perpetrator of the power-grid hack has been identified as “CrispinX,” but they have not been able to trace him.

Lead by Dorian, Kennex and Stahl visit Rudy at his lab. Rudy was a renowned hacker in his day, and knows of ChrispinX who is a hacker for hire. Rudy says all the hackers would be at a celebratory party after the big hack, so Stahl suggests she uses Rudy’s old handle, Aphid, to infiltrate. Kennex will accompany her as a backup. Rudy insists they dress the part in order to fit in.

Kennex and Stahl arrive at the party in disguise only to find it is not a real party but a virtual one. They meet a scattering of hackers in the large building complex before finding CrispinX. Stahl presents herself as Aphid, and the impressed hacker introduces himself as Nico before he is handcuffed by Kennex.

Meanwhile, Dorian is being examined by Rudy who offers a possible explanation for the false memories; the neural nets creating context for pieces of archived recorded data. He then tells Dorian that he used to wake him up routinely for company during his decommissioned years. He had to erase the memory files when Dorian was recommissioned, but apparently had missed some. Before he leaves, Dorian tells Rudy he would like to have back the memory files of their conversations.

Detained at the precinct, Nico Galasso admits that he was hired by DISRUPT to hack into the city grid. He insists, however, that DISRUPT is about civil disobedience and not murder, and did not kill the Bennetts. They are interrupted by news of another murder.

The victim is Peter Newsom, the lawyer. He died from respiratory failure when the fire-suppression system sucked all the oxygen out of his smart house. Even though the system had been turned off, the hacker managed to remotely activate it. Nico was in custody at the time, so he is now off the hook. Kennex notices that Newsom had received the same threatening e-mail the Bennetts received on the day they were killed. Aaron’s photo in the e-mail appears to be a candid shot, not a stock photo – the sender must have known Aaron.

Back at the precinct, Kennex offers Nico a deal; immunity for helping track down the suspect. Stahl found the candid shot on Aaron’s computer – it is one half of a photograph. They want Nico to retrieve the other half and uncover the hidden social network tag on the file. Kennex tells Nico to take the deal and do some good in Aaron’s name. Nico agrees, but he will need his own equipment.

Back in his lair, Nico hacks Aaron’s files and finds the photo. The other half shows a teenage girl whom Dorian identifies as Emily Wilson. Although talented, Emily was expelled from school for assaulting a classmate. She moved to Arizona after Aaron’s death, and was reported missing last month. Nico manages to track down Emily, and he finds information she had gathered on the Bennetts. He also finds records on Kay Stenson, the Synturion CEO. Kennex and Dorian run out while Stahl stays behind with Nico.

Kay is working late in the deserted Synturion building when Kennex calls. She is receiving the same threatening e-mail as they speak. Kennex tells her to lock down the building and wait for them.

Nico, in the mean time, has followed Emily’s footprint straight into Synturion. She is not only on their server but is on-site and manually overriding systems. By the time Kennex and Dorian arrive at the scene, Emily has complete control over the system and is using the Sam android to go after Kay. Nico unlocks the front door, and Dorian heads for the server room while Kennex looks for Kay.

As Sam closes in on Kay’s hiding place, Nico takes over and turns off the android. Kay gets away, but now Emily is aware of Nico’s presence. She reactivates the unit, then activates all the Sam bots and the fire-suppression system. They have 5 minutes before oxygen system shuts down.

Dorian reaches the server room and locates Emily. As he approaches her, a Sam attacks. While Dorian is fighting, other Sams are approaching Kennex’s position. Kennex sees projectors around him and asks Nico to access the holo system. Nico projects multiple images of Kennex to confuse the attacking robots. The trick works and Kennex is able to destroy the androids and rescue Kay.

Meanwhile, Dorian destroys his opponent and faces Emily. Emily threatens to shoot herself unless he backs off, but Dorian talks to her: he knows she loved Aaron, and Aaron cared about her too. Killing people will not bring him back. As Nico works furiously to disable the fire-suppression system, Emily breaks down and surrenders the gun. She tells Dorian that Aaron was coming to see her when he crossed the Bennetts’ yard. Nico stops the oxygen shutdown just in time.

At the precinct, Stahl tells Aaron’s mother about Emily’s arrest. She explains how Aaron was reaching out to a troubled girl when he was killed. Stahl then shows her an image of Aaron she found: it is composed of messages from all the people he had connected with online. Aaron had touched many lives.

At the lab, Rudy discusses Dorian’s image files with Kennex. He was looking into an irregularity in Dorian’s diagnostics when he found them buried deep in his processing core. Rudy had lied to Dorian about the images: they are not recorded data but organic memories planted by someone a long time ago. He removed the shadow files and closed the insertion point, but they must monitor Dorian closely. Fearing people would mistake it for a malfunction, Rudy asks Kennex not to tell anyone, including Dorian, until he figures out what is going on.

- Rudy Lom to Dorian, listing what they used to do together 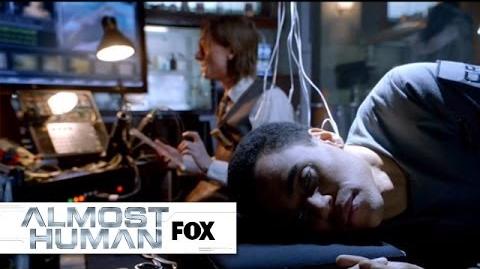 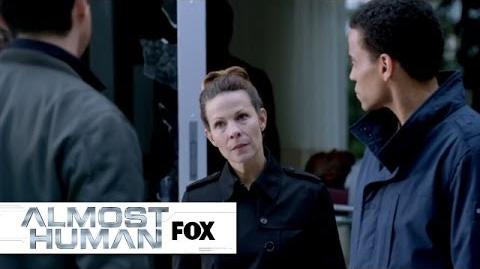 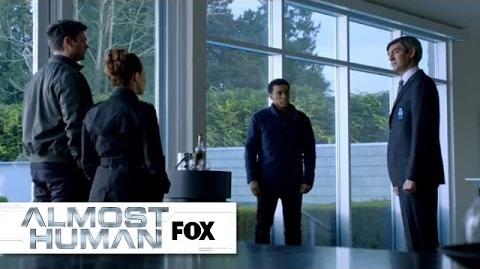 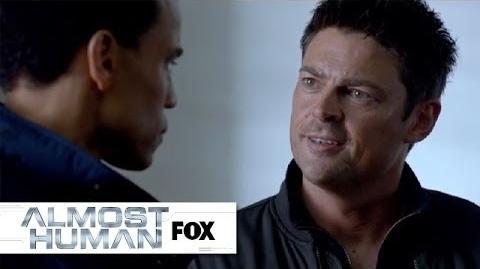