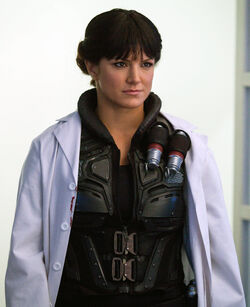 Danica is an advanced XRN series prototype android. The XRNs were created by Dr. Nigel Vaughn, through his company Lumocorp Robotics Corporation. She was the first and only one ever made.

Danica was built to promote the XRN series, that were to replace the DRN series, to apparently fix the malfunctions of the DRN series' Synthetic Souls when used as police officers. She was given the name "Danica" by Dr. Vaughn.

It later became apparent after John Kennex blew up and destroyed Danica that she was merely meant to be a diversion so that Dr. Vaughn could escape over The Wall.

Casualties caused by the XRN[]