Blood Brothers is the fifth episode aired of Season 1. For the original production order of the series, Skin should be viewed fifth. (see season 1 episode list)

Detective John Kennex and Dorian are tasked with protecting the only remaining witness in a major murder trial, while Captain Sandra Maldonado faces off with the defendant.[1]

John Kennex, is waiting patiently for Dorian to come up from the android combo locker room-hibernation chamber, but when Dorian doesn’t show, John heads down to find him and is scarred for life after seeing an MX-43 sans police outfit. And only two words do it justice: “Ken doll”.

On the drive over to court, Dorian (who is missing his chestplate as it was damaged and he and Kennex will swing by Rudy Lom's laboratory later to pick one up) brings up potentially getting his own place – or at least putting in a request to Sandra Maldonado through Kennex. Just being around the lifeless MXs unnerves him, which leads to Kennex’s question of “So … what’re you like down there?” He also regrets it, along with how Dorian steers the conversation towards Valerie Stahl. Again.

Chief Sandra Maldonado is testifying for the prosecution against the charged murderer of a fertility doctor, Dr. Liam Fuller. There’s no physical evidence (fingerprints, DNA, etc.), but there are two eyewitnesses ready to testify via hologram that they saw Ethan Avery, the defendant (an apparent genius philanthropist and upstanding citizen), kill Dr. Fuller. Everything’s going smoothly (apart from the manipulative defense attorney) until someone breaks into the safe-house while Haley Myers (a registered nurse and one of the witnesses) is giving her testimony, killing the MX-43, the bailiff, and Haley (who is still in court via hologram). Maya Vaughn, the other witness, escapes into the nearby forest through the bathroom window. The cops arrive on the scene and sweep both the room and the forest. Dorian finds Maya while Kennex and Richard Paul look over the assault scene; noting that the assassin used "armor piercing" ammunition, while Stahl collects the parts of the dead MX-43 while receiving The Knights soccer updates from her MX, which surprises Kennex because he wasn’t aware that she was into soccer – well, that and he’s recording the game.

Maldonado, meanwhile, meets with Avery on the other side of a razor-wire enforced glass window. She gets nothing out of him, and in return, he picks her apart and taunts her that despite all her accomplishments, she’ll be alone in the end. Back at the precinct, Maya is in questioning with Kennex and Dorian, revealing that Haley saw the killer, which puzzles Kennex and Dorian. Maya then reveals to them what she told Haley earlier: she’s a medium psychic (and a petite psychic on some days) because of the Cerebellux procedure, which is supposed to increase extrasensory perception in recipients. And who does Haley say killed her? None other than Ethan Avery.

Kennex and Dorian bring this news to Maldonado and the small team (her, Paul, and Stahl), but Maldonado doesn’t believe it. Rudy Lom shows up with audio evidence retrieved from the dead MX-43, and provides the information that an auditory specialist, such as Rudy himself, can detect if a voice print is the result of a mimic or the actual person. The voice print matches none other than Ethan. Stahl thinks that Ethan has an identical twin, but Sandra reports that this has been checked into and is not true. Kennex brings up the possibility of a clone, as there’s no evidence of Ethan having any siblings. However, cloning has been banned, so … two strikes? Anyway, Stahl learns from Adelaide Jones, Fuller’s research assistant on a 22-year-old paper about stem cell cloning, that Fuller’s research is most likely at his mother’s house, so it’s off to find the research while Kennex and Dorian collar Maya, who walked out of the station (after giving readings to department members) to deliver a message to Haley’s parents. While they’re on their way to wherever, Maya tells John she sensed a strong red aura (a sign of anger and frustration) and had a vision of bright light, running, and bourbon … and then they’re ambushed by a van of four masked men. Maya is hit and one of the gunmen goes down as the other three escape while Dorian calls for an ambulance and Kennex unmasks the gunman as a younger clone of Avery.

Dorian accompanies Maya to the hospital and she reveals that she got the Cerebellux procedure after her 19th birthday when her parents died in a car crash in hopes of being able to communicate with them, as that was a sometimes result of the procedure. However, her family house burned down before she could communicate with them, so she was forced to move out. Still at the scene of the ambush, Kennex has a eureka moment and calls Rudy up on a secure line to confirm that the clones have an MX’s ear, which has allowed them to monitor police comm signals. Back at the precinct, Maldonado announces that Rudy is establishing secure comms for the department before accepting an evidence delivery from Stahl and her MX-43 via a precinct MX-43. Stahl, having gone into the Fuller house on nothing more than “I’m worried about Mrs. Fuller,” to convince her MX-43 it was legal, found photographic and video evidence of a cloning experiment and had her MX-43 send it back in before Kennex's discovery of the listening device. She went downstairs, found spare cots, and came back upstairs after hearing shots, only to be taken hostage by the three remaining clones of Avery.

Looking over the digital evidence from the Fuller home, the team realizes that Fuller was going to publish a study about cloning – thereby revealing Avery – so Avery (or one of his clones) killed Fuller. Just then, Kennex gets a call from Stahl – or at least it’s Stahl’s phone, but one of the clones stepped up as the lead hostage-taker. His demand: Bring Ethan Avery to specific coordinates (a woodland area with little reception) within two hours or Stahl gets it. Stahl knows the department won’t give in, but they end up conceding – or do they?

Both vans arrive at the meeting point as Maldonado walks a cuffed Avery down a prison hallway in view of holographic scanners, which Rudy beams to their location to simulate a hostage exchange. All is going well, except Maldonado and Avery are slowly running out of hallway – and then the clones realize that Maldonado and Avery are a holographic projection when some nearby startled crows fly through the projection itself, causing it to glitch momentarily. Stahl elbows the clone holding her and runs back towards the police van as a shootout ensues between Kennex, Dorian, and the three clones. Two clones bite the bullet and the third flees in their shot-up blue van, but Dorian gives chase and flips the van.

Back in court, Maya takes the stand and testifies against Avery, sealing the case in the prosecution’s favor. As she’s departing, Maya hints to John that “the universe has a way of working things out” regarding his aura. Maldonado briefly gloats to Avery, digging in the point that he’ll be forgotten about in the history books, before returning a compliment from Ortega (the state prosecutor) with a smile, silently acknowledging that she’s opening up after Avery’s harsh words during their earlier meeting. Dorian finds Maya in her car and gifts her a box of evidence from the arson investigation of her family’s house, finally allowing her to connect with her dead parents. And as for Kennex, later that night, he’s catching up on the soccer game in the dark and empty precinct while finishing up a report and Stahl joins him to re-watch the game; she comes bearing bourbon, and Kennex recalls Maya’s vision of running, bright lights, and the smell of bourbon before settling in to watch the rest of the game with Stahl.[2]

"Oh my God. Is that all for one person?"

"The irony is I talk to people all the time, but I can’t talk to the people who matter the most to me." 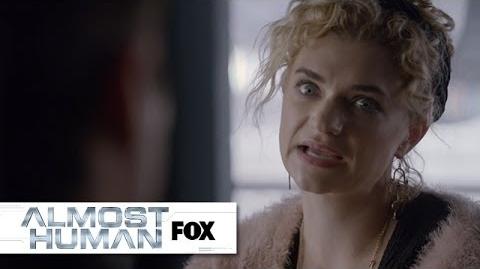 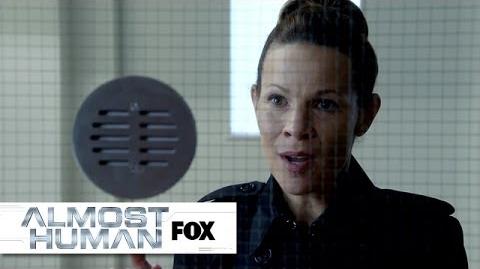 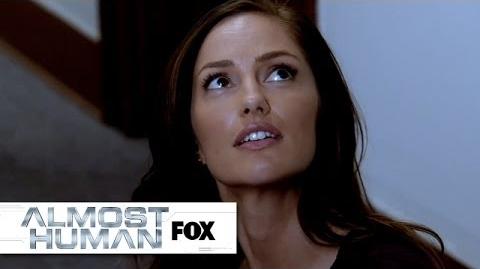 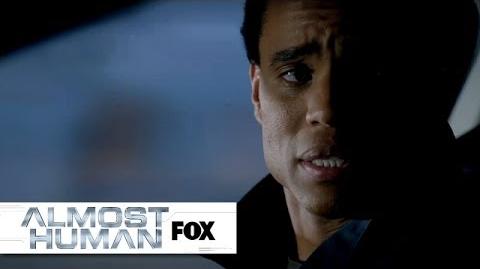 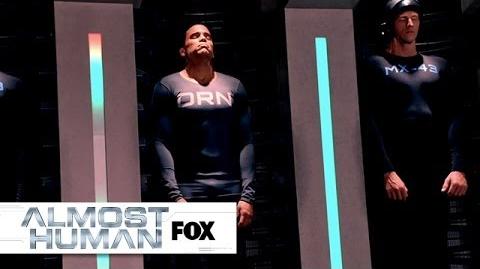 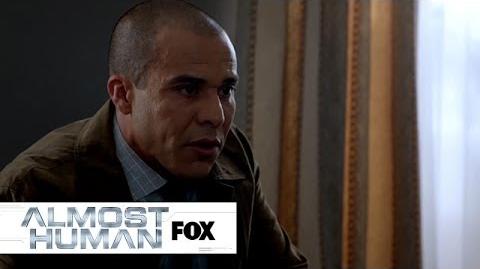 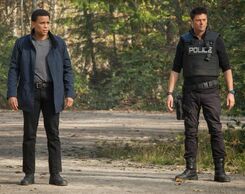 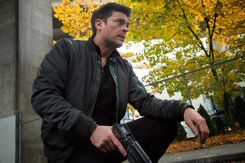 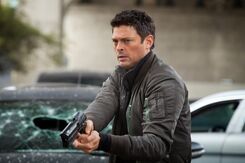 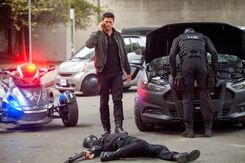 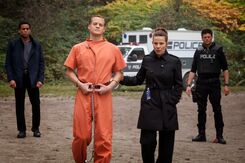 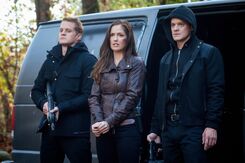