Beholder is the twelfth episode aired of Season 1. The order of airing and production match for this episode.

When Detective John Kennex and Dorian investigate the murder of a chrome, there are no signs of trauma apart from a very small pinprick on the back of his neck.  As the investigation unfolds, it’s revealed that the suspect is tapping into the DNA of his victims in pursuit of perfection.

A man plays a holographic game of golf in his high-rise apartment at night. Hearing a noise, he turns off the simulator to go investigate. He is attacked by a hooded man with a bandaged face. The intruder incapacitates the golfer using a taser then injects something into his neck. The victim’s face appears to distort momentarily. When the syringe is pulled out, there is fluid in the vial.

Next morning at the precinct, John Kennex sits at his desk ignoring his ringing phone. Dorian decides to answer the call and, much to John’s dismay, starts commiserating with “Samantha” about Kennex and his issues. It turns out that Kennex & Samantha had a bad dinner date the previous evening. As Kennex starts to lecture Dorian about the “guy code” of behavior, Valerie Stahl interrupts with news of a possible homicide.

The victim, Brian Barrow, is a 28-year-old bond trader. Although there are no obvious signs of foul play, Stahl does not believe he died of cardiac arrest as reported. Barrow is a chrome, genetically engineered to be free of congenital defects, and unlikely to die so young of natural causes. Kennex is skeptical until Dorian finds a small puncture wound at the base of the victim’s skull. Analyzing the wound, Dorian is surprised to find DNA from seven different people on the victim.

Following the DNA evidence, the team discovers 7 more potential victims who all died of “natural causes.” None of them was a chrome, so their deaths had not been questioned. In light of the new evidence, it appears there is a serial killer on the loose. However, other than the fact that they all lived within city limits, the victims do not appear to have anything in common. Captain Maldonado sees one pattern – the victims are all attractive.

In the mean time, the hooded attacker visits an underground doctor. He takes out the vial containing the fluid drawn from Barrow and orders the doctor to “do it again.” Reluctantly the doctor hooks him up to a machine, gives him an injection, and turns on the device. The man screams in pain as his scarred face starts to twitch.

The news of the serial “beauty killer” has been leaked to the press, and Maldonado is not pleased. Stahl has learned that Barrow was at the Electus, a chrome club, shortly before he was killed. She volunteers to check it out in case he was followed home from the club. Maldonado, knowing Stahl’s reservations about dealing with other chromes, expresses her concern. Stahl explains that the chromes called her in because they need her to prove it was murder. A natural death would dispossess them of their most valuable asset; the assurance of a long and healthy life.

At the Electus Club, Stahl is refused entry by a general manager who is shocked to see a chrome working as a police detective. They engage in a spirited bluffing session before the owner, Jake Bellman, intervenes. He invites Stahl to sit down with him, and appears genuinely interested in her personal story. Stahl brushes him off with a “it’s a long story,” but he is undeterred. His brother disappointed their parents by becoming a chain-saw sculptor, so he is not put off by Stahl’s career choice. He agrees to give her their surveillance video to help make her happy.

Meanwhile, Kennex and Dorian check in with Rudy Lom who has been performing vir-topsy on the bodies of earlier victims. He confirms they all have the same puncture wound. Furthermore, he has discovered that the wound is a needle mark made by someone injecting nanobots. Once inside, the nanobots crawled their way into the victims’ skulls and killed them. Two of the nanobots were found inside the latest victim, and Rudy is trying to determine their function.

At the precinct, Maldonado congratulates Stahl on her success at the chrome club. Not only was she able to obtain the tape, but Stahl does not appear nearly as perturbed as she was in the past after dealing with chromes. Stahl admits she was pleasantly surprised – she had forgotten chromes are people too.

The surveillance footage shows a man following Barrow as he leaves the club. Then another camera catches the suspect. Facial rec identifies him as Alec Gorvain, one of the earlier victims. Coming around the next corner, the same man is then recognized as Todd Paxton, a different victim. Rudy now knows what the nanobots do: they perform plastic surgery. The killer is using them to steal people’s facial features.

Prompted by Rudy’s discovery, Kennex and Dorian visit Dr. Randolph Amir, a plastic surgeon who was involved in nanobot facial reconstruction research. Dr. Amir explains that the nanobots perform facelifts from the inside, leaving no scars on the outside. A device called an actuator is used to inject the nanobots into a donor’s target area. Once nanobots collect the necessary genetic blueprint, they are drawn out and injected into the recipient. The trial failed, however, when the donors started dying from arrhythmia.

At the underground surgery, the procedure was successful and the patient, Eric, wants to keep going. Eric was a volunteer for the failed nanobot trials, and he threatens the plastic surgeon into continuing. The doctor is forced to inject Eric with adrenaline to give him the strength to survive yet another procedure. This time, Eric is rewarded with beautiful emerald-green eyes stolen from a street vendor.

Trying to trace the actuator, Kennex and Dorian drive to Chinatown in search of an informant. On the way, Dorian assures Kennex it is OK that he has flaws – and proceeds to list the flaws. Kennex is just starting to mount his counterattack when Stahl calls with the news of the green-eyed victim being found. First 7 victims had been spaced a month apart. Now the killer is accelerating.

They arrive in Chinatown with Dorian still enumerating Kennex’s flaws. Looking around, Kennex spots a large woman and asks her if she knows a man named Di Carlo. When she replies no, Kennex knocks her down without warning. Suddenly, the woman’s back opens up and a small man comes out of the shell. Kennex introduces Dorian to Di Carlo, his old informant. Though not happy to have his favorite exosuit damaged, Di Carlo comes through with information on an underground plastic surgeon.

Acting on Di Carlo’s tip, Kennex and Dorian find the surgery. As they break in, the doctor injects himself with adrenalin hoping to fight his way out. He attacks Kennex with savage strength, but goes into cardiac arrest and dies. His name was Dr. Curtis McCann, one of the doctors involved in the nanobot trials. He lost his license for hiding the side effects. Kennex finds the killer’s face in the computer, and Dorian identifies ten features going into the facial construction. Since there have been nine victims so far, there is one more left to go. Dorian identifies the next victim based on the cheekbone selected.

Stahl bursts into the potential victim’s home with MXs. They are in time, and startled Jonathan Geddes is now under police protection. Eric spots a plainclothes outside and realizes they are on his scent. He tries to call the doctor, but the call goes unanswered. He retreats for the time being.

Convinced the killer would look for another target, the team tries to determine how he is choosing his victims. Stahl notes the victims all lived in the Lower Term. Kennex realizes they all had new 3D license photos on file. Overlaying the DMV map, they find that all the victims belonged to the same district. Searching through DMV employee records, Stahl finds Eric Lathem who went on disability leave when the trials were beginning. Since he was not disfigured, Stahl suggests he may suffer from dysmorphic disorder.

While the team is closing in on him, Eric watches a woman in the building next door, across the way from his apartment window. Then he begins to chat with her on-line. Her name is Judy. She believes he lives in Arizona, and he is coming to meet her for the first time next week. As they chat, Eric sees a news flash that the police are gaining ground in the case.

By the time Kennex and Dorian arrive with MXs, Eric is gone. Dorian decrypts Eric’s computer terminal and finds his correspondences with Judy. He realizes Eric is perfecting his face for her. Before Dorian can track down her identity, Kennex sees her through the window.

Eric comes to see Judy in her apartment. He tells her he came early as a surprise, and apologizes for the bandage. He assures her he will not be wearing it for long, but Judy hesitates. She tells him that she has kept something from him. Looking around the apartment, Eric sees blue laser sensor lights everywhere – Judy is blind. She had been too afraid of losing him to tell him earlier. If only he could love her, she wants him to see that she is the same person he came to know and care for. As he caresses her face, Judi tells him she doesn’t care what he looks like: she is just happy they found each other. Eric kisses her and begins to cry.

They are interrupted by the police busting into the apartment. Eric runs as Judy cries out. Kennex chases him up the stairway to the roof of the building. Eric stands on the ledge ready to jump while Kennex tries to talk him down. Eric asks John if he has ever been loved. When John replies yes, Eric tells him that he would not understand. He says “we are supposed to be loved,” and throws himself off.

Back at the precinct, Kennex is still clearly affected by Eric’s death. Dorian approaches, concerned for his partner. He asks Kennex if he thinks there is someone out there for everyone. John does think so, old-fashioned though it may be. Declining Dorian’s offer to come to a bar with him, Kennex instead approaches Stahl. He tells her he might go out to Leo's for a drink. Stahl says she is going there as well. Unfortunately for Kennex, Jake from the Electus Club is there to pick her up. Kennex watches them leave together. He turns away in disappointment, and does not see Stahl stop and look back at him before following Jake out. Later, out alone in the beautiful busy evening, Kennex can again only watch as couples walk by him.

"Do you have anyone a little more formidable?"

- Valerie Stahl to Jake Bellman, in reference to the Electus general manager

"Oh, I didn’t realize you two had a relationship."

- John Kennex to Dorian, upon finding out that Dorian talks to his smartbed

"I have never heard his voice. I’ve only heard him grunt when he was kicking your ass."

- Dorian to John Kennex, explaining why he cannot speak in Dr. McCann’s voice

"That’s me. Old-fashioned. Even my robot’s discontinued."

"Do you want me to come to a bar with you and watch you drink?" 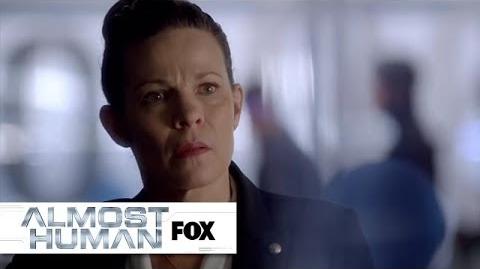 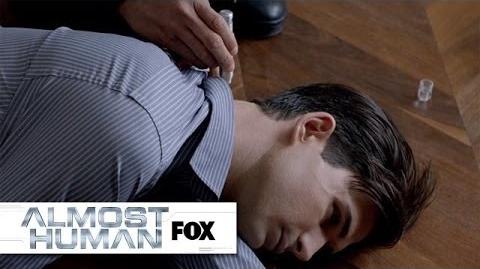 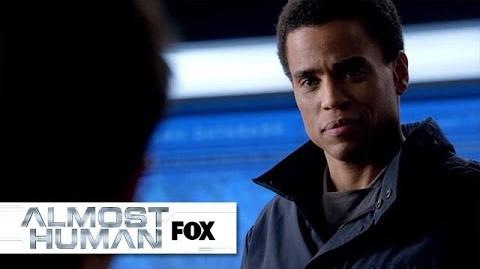 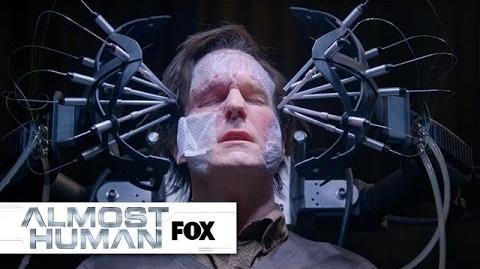 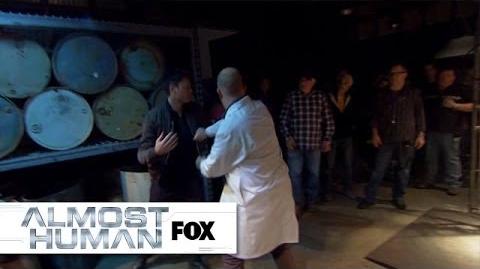 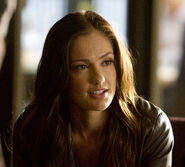