Are You Receiving? is the third episode of Season 1. For the original production order of the series, Arrhythmia should be viewed third. (see season 1 episode list)

John Kennex is woken at 7 AM by his alarm clock, fits on his charged prosthetic, tries out the olive oil tip from Dorian, and heads out to pick him up for their shift … late – and in a car that smells like olive oil, according to Dorian. Dorian ascertains that Kennex’s coffee is at his preferred temperature of 165 degrees by putting his finger in the coffee and taking the temperature.

Meanwhile, a six-person team of enters an office building housing the Sanderson Corporation. They shoot the guy working at the security desk, James, and two of the team proceed to the basement, killing a maintenance worker as they access the server room. They drill a hole in the floor of the server room for a device that looks explosive.

Upstairs, the lead hostage-taker finds Jenna Hernandez, a young woman, cowering under a table and he coaxes her out to the main area of the office where the rest of the hostages are corralled. He and his team members decide that it’s time to get the attention of the cops, so they remotely trigger the device, a Light Bomb, in the server room, which creates a gaping crater where the lobby used to be. Kennex and Dorian, however, won’t stop ascending, despite Maldonado’s orders; instead, Kennex requests backup and a communication jammer, as per the protocol. The hostage-takers lament about the law’s predictability.

Detective Richard Paul is set up outside the building in a mobile command centre, which also includes a jammer. Maldonando orders Paul to abide by the protocol and commencing jamming all signals into or out of the building.

As Kennex and Dorian keep ascending, with the aim to reach the 23rd floor where they should be able to gain entrance to the air duct system, Dorian starts receiving re-routed emergency calls because of the jamming signal, and he patches Kennex into the second call with Paige Hernandez, a woman hiding in a utility closet on the 25th floor; Jenna is her sister. Outside the utility closet, the hostage-takers kill a hostage, defenestrate him, and make their demands to the cops via a secure comm link that a watch drone brings up. The demands are for the snipers and the cops outside to stand down, three VTOLs on the roof with clear airspace to the border and a fission igniter.  The cops withdraw (but not Kennex and Dorian, who are listening in through Paige’s phone), and Maldonado has Rudy Lom get to work on building a replica of a fission igniter (a trigger for a megaton device). Detective Valerie Stahl manages to ID the lead hostage-taker as Lucas Vincent, a high-ranking member of the Holy Reclamation Army, a decentralized network of terrorist cells with an anti-Western bias, which ups the ante for Maldonado and the department.

Kennex, still ascending and on the phone with Paige, does his best to comfort her with a story of his near-death experience during a father-son ice fishing trip from his childhood at Lake McFarland, as she blames herself for Jenna’s situation (Jenna was visiting for lunch). The duo reaches the fifteenth floor, and are spotted by members of the terrorists on patrol in the building. Shots are fired in the stairwell before Dorian sees movement in the cubicle farm, so they head out of the stairwell and split up, getting caught in a shootout. Kennex distracts one of the gunmen via the use of an alarm on his phone and takes him out. Kennex hears other shots being fired and checks in with Dorian to see if he is okay. Dorian has wounded another of the terrorists, Michael Demarais, a member of the Holy Reclamation Army, and discovered a small clear red plastic button with the word "start" etched into it on Demarais. Dorian has a gaping ricochet forehead wound from the firefight with Demarais. While Dorian is performing a scan on Demarais with his facial recognition software, he sees a flicker and discovers that “Michael” is really Gregor Stone, a no-name petty criminal wearing a face maker, and that there are seven other face makers active in the building. Also, because of the head wound affecting his electrical system, Dorian won’t be able to walk in five minutes, so it’s up to John to temporarily fix it with a slightly dirty Q-tip, nail clippers, and a piece of A.B.C. (already been chewed) gum.

Rudy, in his lab, is hard at work prepping the decoy fission igniter device, despite the ticking clock and pressure provided by the MX-43 overseeing him. Back in the Sanderson Building, Kennex keeps talking with Paige while fixing up a passed-out Dorian, learning that the gunmen keep looking out the corner window. He also exchanges some personal info (quid pro quo) with Paige: Jenna’s middle name is Gertrude and Kennex’s is Reginald (after Elton John’s real first name, since Kennex’s father was a big fan). Dorian wakes up and realizes that the bubble gum fix won’t please Rudy, but there was little else that could be done. Upstairs, one of the wounded gunmen from the fifteenth floor returns to the group, warning his compatriots to monitor the stairs, and Lucas calls up Maldonado, asking about “the two cops my men just killed downstairs,” but Maldonado is advised by Stahl that Lucas is bluffing and Maldonado denies knowledge of Kennex and Dorian being in the building.

Back up on the 25th floor, Paige sneaks out to the group of hostages to comfort her sister against Kennex’s wishes when the hostage-takers are distracted by the delivery of the decoy injector. Paige convinces one of the hostage-takers to let her use the bathroom and takes the opportunity to slip her live phone into the pile of discarded cell phones so Kennex and Dorian can still listen in. The duo overhears Lucas tell one of his cohorts to “send a message to the other crew,” and after scanning nearby buildings within the jamming radius and discovering that the “start” button was a projector signal, Kennex and Dorian realize that the hostage-taking is a cover for a palladium heist. Upon reaching the elevators, Dorian climbs up the cables alone and busts in on the hostage situation via the ventilation shaft, only to be shot multiple times and nearly taken down... until “Gregor” returns.

Kennex finishes the job Dorian started by taking out the rest of the hostage-takers and then alerting Maldonado to turn off the jammer, by the phone the watch drone had brought to Lucas, (thereby foiling the palladium heist), as Dorian disarms the light bomb that the hostage-takers set up to kill all but the three hostages they set aside for insurance purposes.

Later in the evening, outside the Sanderson Building, Paige and Jenna thank Kennex for his help as Dorian is getting looked at. The duo arrives at the precinct to a hail of applause (and an unhappy Rudy) and leave to get noodles after learning that “Lucas” was really Gerald Leighton, who executed four high-value robberies in the past two years.

On the drive over to the noodle place, Dorian brings up his near-death experience from that afternoon, but Kennex consoles him with the fact that “dead is dead,” regardless of whether you’re human or android. And then, to Kennex’s embarrassment, Dorian chucks on Elton John's "Bennie and the Jets" for the remainder of the drive, alerting Kennex to the fact that Dorian heard his middle name conversation with Paige.[2]

"I just love that you wear your insubordination like it’s a virtue."

"You can’t put a clock on perfection."

- Rudy Lom to MX-43 who was providing a countdown clock 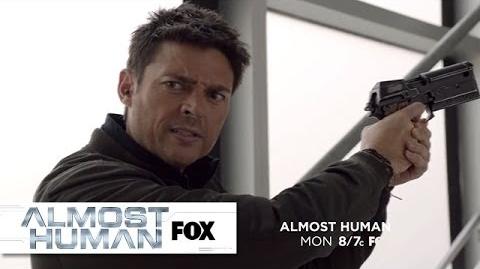 Promo for "Are You Receiving?" ALMOST HUMAN FOX BROADCASTING 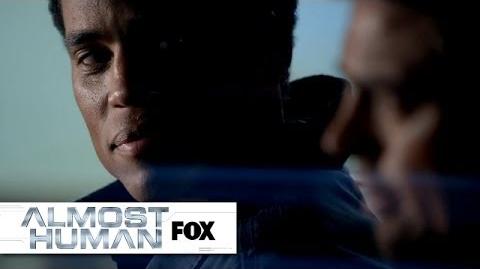 Attention to Detail from "Are You Receiving?" ALMOST HUMAN FOX BROADCASTING 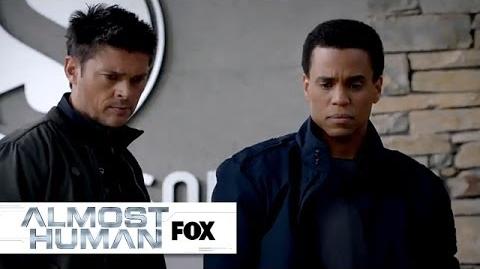 25th Floor from "Are You Receiving?" ALMOST HUMAN FOX BROADCASTING 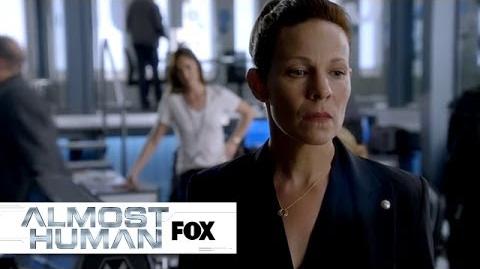 Insubordination from "Are You Receiving?" ALMOST HUMAN FOX BROADCASTING 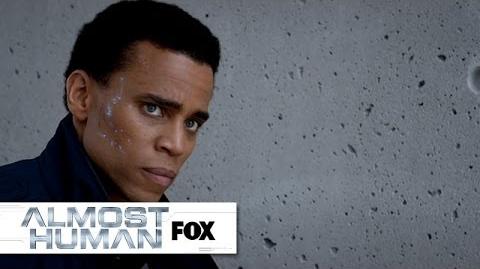 Emergency Responder from "Are You Receiving?" ALMOST HUMAN FOX BROADCASTING 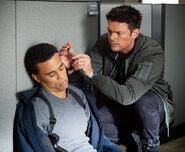