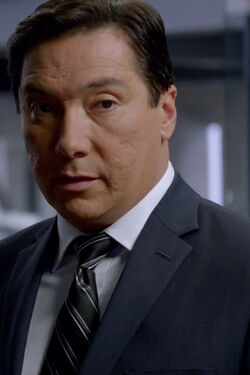 Alexio Barros was a Captain in the 25th Precinct of the Police Department, and the head of the Narcotics Division there.

Trevor Cooper was one of his detectives. Barros described Cooper as having a 'dog with a bone' and that rubbed people the wrong way, hence leading to some disciplinary actions. Barros reported that Cooper had been trying to investigate the main distributor of The Bends but hadn't got any arrests. Barros shut down that investigation, but Cooper kept up with it on his own, trying to arrange a meeting with the distributor, The Bishop. Barros ordered the killing of Cooper during Cooper's unsanctioned undercover operation as Barros was The Bishop.

As the Bishop, Barros entrusted Gavin Maxwell to be his implied 'face' of the Bishop. Maxwell was up on a major Distribution charge but the charge was dismissed due to lack of evidence. Barros signed the release for Maxwell.

The Bishop had been heading up a distribution network for over a decade. Vice from the 14th Precinct had been trying to get information on him, but only had the codename and no picture or name to put to the Bishop.

The Bishop was trying to perfect the replication of The Bends, a notoriously addictive new drug on the market. He had auditioned over a dozen cooks before Rudy Lom was introduced during an undercover operation. Barros had been able to stay ahead of all investigations into the Bishop due to his position as head of the Narcotics Division at the 25th Precinct.

Those within the Bishop's organization include:

During the undercover operation, Barros' men did not answer their phones to bring the materials to the Ironworks District. Before suspicion could fall upon the new cook, Rudy Lom aka Callum Waits, Lom escaped from the laboratory. He was pursued by the Bishop's men around the abandoned building. While he was hiding from them, Detective John Kennex and Dorian arrived to provide assistance. Barros used the VX unit as protection while Detective Kennex was firing at him. Dorian went to help Lom and the VX and he fought. Barros had escaped down into the tunnels and he was pursued by Detective Kennex.

Detective Kennex's gun was no longer working and instead he used an iron bar he found on the ground to attack Barros with and knock the gun from Barros' hand. During the ensuring fight, Detective Kennex was able to beat Barros down to the ground and retrieve Barros' gun. He aimed the gun at Barros' head who informed Detective Kennex, that as Barros was a Captain, he was going to bury Kennex like he had done to Cooper and that any trial would be a mistrial. Detective Kennex shot Barros in the head at close range while Barros was unarmed. It is unknown at this time if this fact has come to light.